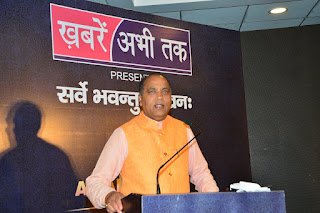 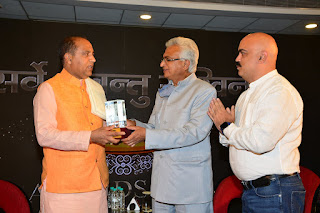 SHIMLA-----Chief Minister Jai Ram Thakur said the state government has made sincere efforts to give pace to the development of the state. Although the Covid-19 posed the biggest challenge for almost two years and the economy of Himachal Pradesh was adversely affected due to this pandemic but with consistent and honest efforts the state government ensured to keep up the pace of development and welfare of all sections of the society.

The Chief Minister was speaking during a function organised by Khabrein Abhi Tak news channel here on Sunday evening to present leadership awards to the achievers in the different fields.

He said that Himachal emerged as a pioneering state in handling the Covid situation and with the support and assistance from the government of India, the state government ensured that people do not face any kind of inconvenience and they get better medical treatment facilities. The bed capacity was increased and no patient had to face shortage of oxygen and ventilators.

He said all out efforts were made to facilitate and give relief to the transporters, hoteliers and government employees. With the sincere efforts of the state government and full cooperation of the people of the state, Himachal Pradesh emerged as a champion in the battle against Covid-19 and became the first state to vaccinate the cent-percent targeted population.

Jai Ram Thakur said that the employees of the health department, AASHA workers, Anganwadi workers played a significant role as frontline workers in the fight against Covid pandemic. Likewise, private hospitals, NGO's and various associations also contributed immensely in helping the poor and needy and supplementing the efforts of the government.

The Chief Minister said that Himachal Pradesh earlier had facility of only 50 ventilators but with the help of the government of India, today we have more than one thousand ventilators and 48 oxygen plants while earlier there were only two plants. The state government is also providing facility of 56 types of free medical tests in the government health institutes besides providing around 1374 types of medicines free of cost.

He added that the state government also ensured to revive the economic activities at the earliest by attracting investment of thousands of crore. Jai Ram Thakur said that he performed foundation laying ceremonies and inaugurations online amounting to over Rs. 4300 crore during the Covid times.

He said the present state government has been working with utmost dedication to provide better living conditions and ensure welfare of various sections of the society. The age limit for old age pension without any income limit has been lowered to 60 years from 80 years.

The Chief Minister said that the HIMCARE scheme has been started to benefit those eligible beneficiaries who could not be covered under the ambit of Ayushman Yojna of the centre government. So far, 3.66 lakh people have been provided free medical treatment facilities in the state under both these schemes by spending Rs. 372 crore.

The state government also launched Mukhya Mantri Sahara Yojana to provide financial assistance of Rs. 3000 per month to the patients suffering from critical ailments. More than Rs. 56 crore has been spent on helping around 17 thousand needy patients under the scheme, said the Chief Minister.