every mandal worker must work with greater dedication 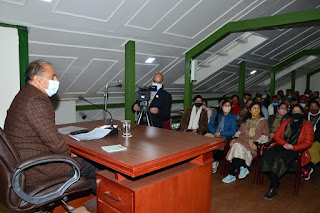 Chief Minister Jai Ram Thakur while addressing the BJP Mandal Milan Programme of the Shimla Rural at Oak Over today said that every mandal worker must work with greater dedication and commitment to ensure strengthening the Party at the grassroot level.

Jai Ram Thakur said that every worker must respect their leaders and work with coordinated efforts to come upto the expectations of the party leadership. He said that the State was fortunate to have benevolence of Prime Minister Narendra Modi and the Party was headed at the national level by son of the soil, J.P. Nadda.

Chief Minister said that the workers must plan two to three major events in the constituency in which he would participate. He said that a few major developmental issues must also be identified so that they could be taken in hand at the earliest. He said that party office bearers must ensure that the responsibility entrusted to them work with missionary zeal to deliver the results.

Jai Ram Thakur said that since government has entered the election year, it was important that the rank and file of the party to work with renewed vigour.