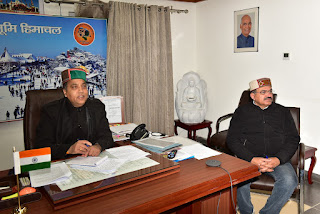 Shimla---      Chief Minister Jai Ram Thakur while addressing the Indians virtually on the occasion of 'Pravasi Bharatiya Diwas' organized by the Himachali Pravasi Global Association from here today appreciated the Himachalis living in different parts of the world to effectively preserve rich culture and tradition of Himachal Pradesh away from home.  Jai Ram Thakur said that Pravasi Bharatiya Diwas is a day dedicated to the overseas Indian community. He also urged the NRI Himachalis to come forward to be the partners in development of the State by investing in the State.

He said that the people of Himachal Pradesh have created a special place for themselves in different parts of the world due to their hard work and dedication. He said that despite being a small State, Himachal Pradesh has shown a way for several big States in different fields of development. He said that the State Government has organised Global Investors Meet to attract private investment in the State. He said that these efforts have proved a grand success as the State Government has succeeded in getting ground breaking of projects worth about Rs. 42,000 crore in two ground breaking ceremonies held after the Global Investors Meet.

Chief Minister said that this event would go a long way in creating cultural bonds and an ecosystem for cultural propagation among the Diaspora. He said that Himachali Diaspora and various Diaspora associations have played a very important role in the propagation of Himachali culture in different parts of the world. This event would bring together eminent Diaspora personalities and associations involved in propagation of Indian culture to discuss innovative ways of leveraging the Diaspora to enhance India's soft power in this field, he added.

Jai Ram Thakur said that this webinar would bring together the Himachalis abroad to enrich knowledge, expertise, and skills to be shared in a common platform. He said that Pravasi Bharatiya Diwas plays a significant role as the overseas Indian community gets a shared platform to get themselves engaged with the government and the native people of the land.  He also thanked the Himachalis for their contribution during the Covid-19 pandemic.

President Himachali Pravasi Global Association Bhagya Chander, a Himachali living in Canada welcomed the Chief Minister and said that main aim of this Conference was to ensure better relations and understanding with the people of Himachal Pradesh living in different parts of the world.   Advisor-cum-Principal Private Secretary to the Chief Minister Dr R.N. Batta welcomed the delegates.