CM appreciates doctors for their selfless and dedicated services to society 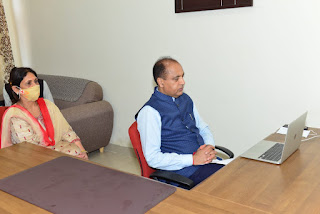 CM appreciates doctors for their selfless and dedicated services to society

SHIMLA---- Chief Minister Jai Ram Thakur today while virtually addressing the doctors on the occasion of National Doctor's Day from Thunag of Mandi district appreciated their role in mitigating the pains and sufferings of the society. He said that the doctors not only help patients in minimizing the pain and recovering from the disease but their importance go far beyond that as they also save precious lives.

The Chief Minister said that this Day was observed every year as National Doctors Day to commemorate the birth and death anniversary of former Chief Minister of Bengal and noted physician Dr. Bidhan Chandra Roy. Dr. Roy was a great doctor who made an enormous contribution to the medical field.

He said that this day was dedicated to all the doctors and healthcare workers who had been serving the people by risking their own lives. He said that the Covid-19 pandemic had once again reminded us about the contributions and sacrifices made by doctors and healthcare workers around the globe.  Dr. Roy was also called the first medical consultant in the subcontinent of India who towered over his contemporaries in several fields as per British medical journal. The National Doctor's Day was observed to acknowledge the doctor's role and responsibilities in serving lives and also to recognise their functions and obligations, he added.

Jai Ram Thakur said that during the Covid-19 outbreak, the medical doctors had been working round the clock to save several lives. He said that instead of thinking about their own safety and their family's safety, they chose to serve the nation.

The Chief Minister said that the state government was committed to strengthen the health infrastructure besides taking effective steps to tackle the anticipated third wave of the Coronavirus. The state government had enhanced the bed capacity from 1200 to about 5000 to ensure that there were adequate beds to meet out any eventuality. As many as eight PSA plants had been established in the state during the last about one year and about 28 PSA plants would be established by 15 August this year. He said that there were adequate oxygen cylinders to cater to the needs of the patients and the work on construction of building for medical colleges at Nahan, Hamirpur and Chamba was going on war-footing.

Jai Ram Thakur expressed hope that the doctors of the State would keep on working with same dedication and commitment to ensure that Himachal Pradesh become a happy and healthy state of the country.

Health Minister Dr. Rajiv Saizal thanked the Chief Minister for successfully guiding the state during the testing time of Covid-19 pandemic. He said that people had great faith in the doctors and this was the real asset and reward for any profession.

Secretary, Health Amitabh Awasthi said that the health infrastructure in the state had been strengthened immensely under the able leadership of Chief Minister Jai Ram Thakur. He said that the vaccination campaign was going on smoothly in the state and about 39 lakh doses had been administered till date.

Professor and Head, Pulmonary Medicine Dr. Malay Sarkar made a presentation on Covid and steps being taken to check spread of this pandemic.