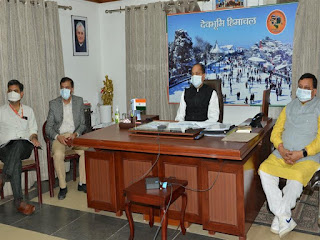 SHIMLA-----Chief Minister Jai Ram Thakur while addressing the National Webinar on Realization of Mission Natural Farming among Smallholders' organized by the State Project implementing Unit, Prakritik Kheti Khushhal Kisan Yojna of Department of Agriculture, from Shimla today said that the State was promoting natural farming in a big way so as to double the income of the farmers by end of 2022.

Jai Ram Thakur said that in order to promote natural farming in the State, the State Government was implementing Prakritik Kheti Khushhal Kisan Yojna. He said that this would not only boost yield of the crops but also reduce farming inputs in a big way. He said that Subhash Palekar Natural Farming was emerging a favourite for agricultural practices to reduce farmers direct cost while boosting yields and farm health through the use of non-synthetic inputs sourced locally.

Chief Minister said that the land holdings in the State were limited and most of the farmers falls under small and marginal category. He said that the natural farming not only yields better crops but also fetch good prices to the farmers.

Jai Ram Thakur said that Himachal Pradesh was known as Apple Bowl of the country but the over use of chemical fertilizers by apple growers was matter of concern. He said that fortunately more and more apple growers were now adopting natural farming which was fetching them good prices of their produce. He said that the Government was also endeavouring to evolve a mechanism for certification of natural products so that they could be better prices of their produce.

Agriculture Minister Virender Kanwar said that the Subhash Palekar Natural Farming was being promoted in the State in a big way. He said that natural farming was not only beneficial to the farmers but also environmental friendly.

State Project Director Rakesh Kanwar welcomed the Chief Minister and conducted the proceedings of the Webinar.