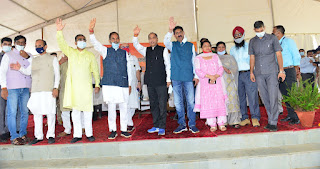 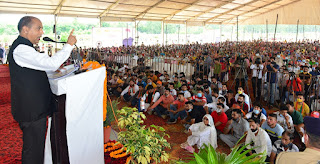 Shaheed Samarak to be established at Fatehpur

Jai Ram Thakur said that  Himachal Pradesh was among the best States in the matter of Covid management. The steps taken by the State Government to check the spread of this virus has been appreciated not only by the Prime Minister, but even by other States also.  He said that the Congress remained in power for last about 50 years in the State as well as at the Centre. There were only 50 ventilators in the State when this virus broke in and he took up the matter with the Prime Minister and immediately 500 new ventilators were provided under the PMCAREs for the State. Today there were over 700 fully functional ventilators in various hospitals in the State, he added.

Jai Ram Thakur said that 3.20 lakh gas connections were provided to the eligible families under the Grihini Suvidha Yojna. As many as 1.70 lakh families have been benefitted under the HIMCARE Yojna and Rs 3000 per month were being provided to families with critically ill patients. The Jan Manch programme and Chief Minister Sewa Sankalp Helpline-1100 have also proved a boon to the people of the State for redressal of their grievances. He said that 'Shagun' scheme has been launched in the State to provide a financial assistance of Rs 31000 to girls belonging to the BPL families of the State at the time of their marriage. He said that all these schemes have transformed the economy of the State and its people.

Jai Ram Thakur also provided benefits to the beneficiaries of various welfare schemes on the occasion.

Chairman, State Finance Commission Satpal Singh Satti said that the Chief Minister has visited Fatehpur area for the second time which shows his concern towards the development of Fatehpur area. He said that the Chief Minister himself was from a simple background and was well aware of the developmental expectations of the people of the State. He said that this was only possible in the BJP as it was a party of the workers unlike Congress which was a party of a family. He urged the people of Fatehpur area to support the present State leadership to ensure equitable development of the area.

Former MP Kripal Parmar said that the present tenure of the State Government under the able leadership of Chief Minister Jai Ram Thakur has ushered in a new era of development in the State and Fatehpur area has also been progressing by leaps and bounds along with the other parts of the State.