We need torespect our culture and traditions :CM 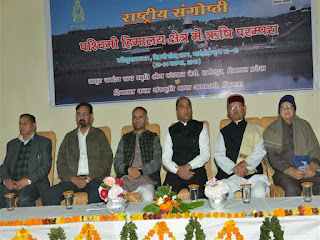 We need to respect our culture and traditions :CM

HAMIRPUR------The Devi Bhoomi of Himachal Pradesh was blessed to have been chosen as the Tapobhoomi by hundreds of sages and thus it has an indelible imprint on the life of the people of the State. This was stated by Chief Minister Jai Ram Thakur while presiding over the inaugural Session  of National Conference on 'Western Himalaya Kshetra Main Rishi Parampara' organized by Thakur Jagdev Chand Memorial Research Institute, Hamirpur and Himachal Art Culture and Language Academy at Neri in Hamirpur today.

Chief Minister said that it becomes duty of each one of us to preserve the rich Rishi Parampara of the State. He said that in the present era of cut throat competition we have left behind our rich traditions and culture which was a matter of concern. He said that only those society progresses which have respect for their rich culture and traditions. He said that we should also motivate younger generations to come forward to understand and respect their ancestors and only then sense of respect for their ancestors could be inculcated.

Jai Ram Thakur said that the Sansthan was indeed doing a commendable work in promoting the rich and diverse cultural repository of the State. Himachal Pradesh universally acclaimed as Dev Dhoomi, was indeed a 'Rishi Bhoomi' as almost each and every area of the State was linked and associated with one Saint or Sage. He said that Manali was associated with Manu Rishi, Mandi with Mandav Rishi etc. He said that sages like Beas, Markendaya, Prashar etc chose Himachal Pradesh as their 'Tapo Bhoomi'.

Noted Sanskrit Scholar and President Award winner Mahamahopadhaya Keshav Sharma thanked the Chief Minister for declaring Sanskrit as the second language in the State. He also appreciated the efforts of the State Government for promoting Sanskrit language.

General Secretary of the Sansthan Bhumi Dutt Sharma honoured the Chief Minister by presenting him a shawl and memento.