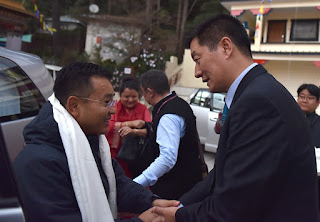 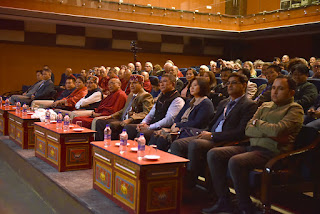 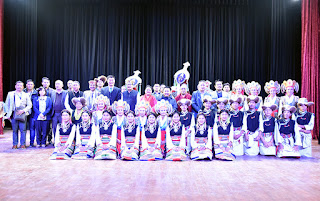 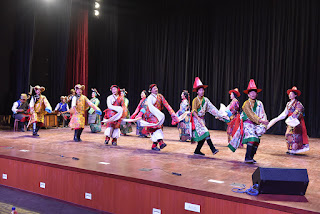 Dharmshala--------The President of Tibetan Government in Exile, Dr. Lobsang Sangay along with his Cabinet collogue hosted a private dinner for Sikkim  Chief Minister  Prem Singh Tamang and his family after a scintillating cultural show put by the artists of Tibetan Institute of Performing Arts .

After their arrival in Dharmashala, CM Prem Singh Tamang and his family were given a befitting welcome reception by Dr Sangay and the Ministers  of Tibetan Government in Exile.

Welcoming the delegation, Dr. Sangay remarked, "you are the first VIP guests after the inauguration of TIPA's new auditorium by Dalai Lama. Following this, Sangay gave a brief introduction about TIPA and said the Insititute was built under the vision and guidance of Dalai Lama in 1959 to 'preserve Tibetan culture and identity'. "I want to thank you from the bottom of my heart for facilitating the welfare of Tibetan people in Sikkim. Under your leadership, Sikkim as a state will flourish and the people of Sikkim will prosper and harmony will always prevail."

"I welcome all of you. It is a great privilege and honor. You are in a great position to do a lot of things for Tibetan people and spread dharma" added, Dr. Lobsang Sangay. The guest and the delegation were then presented with exquisite cultural performances.