Thereare many religious traditions in the world, all of which advocate the practiceof love--Dalai Lama 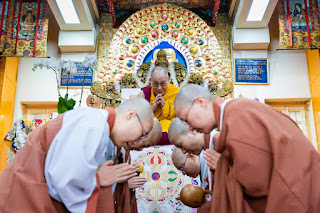 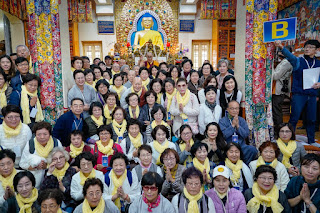 Dharmshala-------- Tibetan Spiritual Leader Dalai Lama concluded the three-day discourse on Heart Sutra for the Korean devotees. More than 6000 people had gathered to listen to him, of whom more than 2000 had come from 60 countries around the world. Principal among them were people from South Korea, who filled in the Main Tibetan Temple at Mecleodganj near Dharmshala.

In the temple, proceedings began as usual with monks from Thailand reciting the 'Mangala Sutta' in Pali. They were followed again today by a group of Korean nuns who chanted the 'Heart Sutra' in Korean following the steady beat of a 'moktak' wooden fish.

While Addressing the Gathering Dalai Lama said. "Here we have monks from the Theravada tradition and Korean dharma brothers and sisters, who follow the Sanskrit tradition. All of us are followers of the same Gautama Buddha. Buddhism spread across Asia from India to Sri Lanka, Burma, Thailand, Laos and Cambodia, to China, Korea, Japan and Vietnam. It was also carried to Nepal and Tibet, Mongolia and the Russian republics of Kalmykia, Buryatia and Tuva.

"There are many religious traditions in the world, all of which advocate the practice of love, patience, tolerance, contentment and self-discipline. Their many followers have benefited from this. What makes Buddhism different is its philosophical stance. Buddhism doesn't assert a creator god. The Buddha told his followers, "You are your own master." What happens to you is a result of your own actions. "The attainment of liberation and omniscience is not about something outside you. It's about your transforming your own mind. When you free yourself from karma and delusion, you attain liberation. Defilements of the mind can be overcome. Their residual stains can be eliminated, enabling you to see everything as it is, Dalai Lama added.