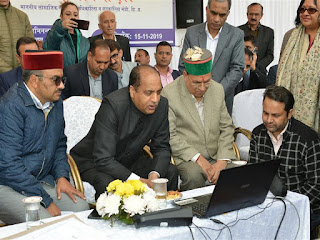 He said that the State Government had launched multi-pronged strategy to wipe out this evil from the society. This month long special campaign was a step in this direction and it should not remain a ceremonial event, but should be result oriented. He said that this could only be achieved with effective coordination between various departments.

Jai Ram Thakur said that medical practitioners had a major role to play to sensitise the people visiting hospitals and similarly teachers should also motivate the students to stay away from drugs. He said that police should adopt pro-active approach to crack down drug peddlers so that this nefarious cycle could be broken.

The Chief Minister said that it was on his initiative that seven northern states have come together to not only share information regarding drug abuse, but also to chalk out a joint strategy to curb this social vice. The state government has decided to open five de-addiction centres in the state and first has been dedicated today established in a private hospital at New Shimla. He said that this would provide relief to the drug addicts to come out from this social vice.

He said that State tourism hotels should also come forward to requesting the visitors to stay away from drugs. This would go a long way in making Himachal Pradesh a real 'Dev Bhoomi' of the country.

The Chief Minister online inaugurated drug de-addiction centre at New Shimla from The Ridge and website of Himachal Pradesh State Mental Health Authority. He also released posters regarding sensitising the masses regarding ill effects of drug abuse and publicity material prepared by the Shimla district administration.

The students of Yoga department of H.P. University gave an impressive presentation on the occasion.

Social Justice and Empowerment Minister Dr. Rajiv Saizal said that the future of any nation lies on the shoulders of our youth, but unfortunately the youth today have fallen in the trap of drug abuse. He said that several de- addiction centres have been established in the State. He also detailed out various activities being carried out by the department to spread awareness regarding drug abuse and also in helping the youth to come out from this vicious prey.

Additional Chief Secretary, Social Justice and Empowerment Nisha Singh said that the one month special campaign has been launched from today in the State to sensitise the people regarding ill effects of the drug abuse. She said that various activities would be carried out during this special campaign.

Earlier, the Chief Minister flagged off the teams of All India Civil Services Tournament being held at Shimla in which as many as 35 team are participating.