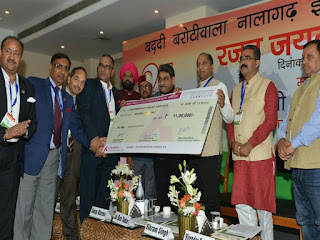 SHIMLA------The entrepreneurs  of the State were the brand ambassadors of the State and could play a major role in attracting investments in the State, thus it was vital that they give their wholehearted support to make the Global Investors Meet slated for 7th and 8th November  this year at Dharamshala a success. Chief Minister Jai Ram Thakur said this while presiding over the Silver Jubilee Celebrations of Baddi-Brotiwala-Nalagarh Industries Association (BBNIA) held at Baddi in Solan district .

Chief Minister said that the State was now ranked top amongst Fast Movers Category in Ease of Doing Reforms and the Single Window Monitoring and Clearance Authority reflects strong commitment of the State Government to ensuring efficiency, transparency, timeliness and accountability in providing services to investors.

Jai Ram Thakur said that BBNIA were major contributors in fast industrialisation of the State. He said that the Government was ensuring to give priority to this area in strengthening infrastructure. He said that the four-laning work of Pinjore-Baddi-Nalagarh Road would be expedited for facilitating the entrepreneurs.

Chief Minister said that soon after assuming the office, he decided to take such innovative steps aimed at welfare of the people and development of the State. He said that organising the Global Investors Meet was one of such decisions. He said that the State offers various incentives to the entrepreneurs such as pollution free environment, investor friendly policies, responsive and accountable administration. All these make Himachal Pradesh a most favoured destination for the investors, he added.

Jai Ram Thakur said that till date  MoUs  worth Rs 79 thousand crore have been signed in the State. He said that the strong and able leadership of Prime Minister Narendra Modi has ensured that the Nation and the State forces ahead on the path of progress and prosperity. He said that investors coming outside of State would not be able to invest without the active support of the local entrepreneurs as they would require their support to do business in our state.

Industries Minister Bikram Singh Thakur said that the state government under the able leadership of Chief Minister Jai Ram Thakur was committed to provide all facilities to the entrepreneur to facilitate them to invest in the state. He said that the government was laying special stress on ease of doing business and the state also has peaceful environment and congenial industrial relations. He said that online approvals were now being accorded for giving time bound approvals for 118 for facilitating the Investors.  He also invited the investors to be part of Global Investors Meet.

President BBNIA Sanjay Khurana while welcoming the Chief Minister thanked the state government for providing congenial environment for the industries in the state. He also thanked the Chief Minister for improving the infrastructure in the Baddi-Brotiwala-Nalagarh Industrial Area. He also threw light on the journey of BBNIA. He also detailed some demands of the Association and urged the Chief Minister to strengthen Baddi-Brotiwala-Nalagarh Development Authority so that better infrastructure could be created in the area. He said that the BBNIA would adopt one high school each in Baddi, Brotiwala and Nalagarh area for taking up rain harvesting projects in these schools.