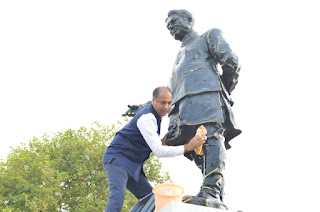 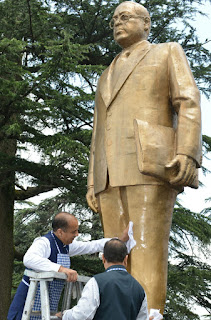 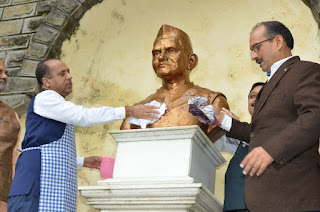 SHIMLA-----On the occasion of Birth anniversary of Pt. Deendayal Upadhyaya, Chief Minister Jai Ram Thakur today participated in the cleanliness drive of the statues of great leaders of the Nation established in Shimla town by cleaning the statue of Founder of Constitution Dr. B.R. Ambedkar situated at Ambedkar Chowk at Shimla today.

While interacting with the media on the occasion, Chief Minister said that this initiative has been launched by the Union Government on the auspicious day of birth anniversary of Deendayal Upadhyaya to not only ensure cleanliness of the statues of our great leaders in order to maintain the sanctity of these statues but also give message to the people to maintain Swachhta in their surroundings. He said that cleanliness not only keep our ambience clean but also keep ourself away from the diseases.