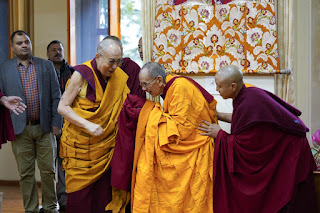 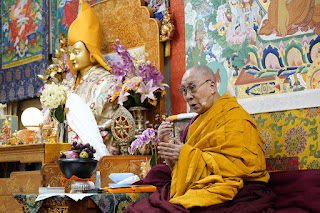 Dalai Lama noted that Tibetans and Mongolians can study the major texts of Buddhism including Pramanavartika or Commentary on Valid cognition, Paramita or Perfection and Madyamaka or Middle Way. Adding these Knowledge with science, Dalai Lama informed that the Nalanda Tradition of Buddhism, it will survive till the 22nd or 23rd century. "And Mongolians can contribute in the survival of Buddhism," said Dalai Lama.

"Buddhism is divided into holy dharma of experience and realization, to uphold, preserve and spread these, there are only two ways which is teaching and practicing" said Dalai Lama.

"Buddhism should also be made to study by the lay people and not only the monks"  Dalai Lama concluded.

Finally,  Dalai lama presented all the members with a statue of Buddha.