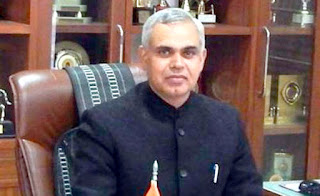 It's high time to shift towards natural farming: Acharya Devvrat

SHIMLA-----Governor Acharya Devvrat has underlined that farmer's of the nation need to shift towards natural farming in a big way not only to double their income but also to maintain the soil fertility, environment and water for the generations to come.

He was speaking as the chief guest during a function organized on natural farming by Budh Ram Dhall Jan Kalyan Samiti, Pundari at Pundari in district Kaithal of Haryana state on Sunday.

He said that after experimenting chemical and organic farming at Gurukul in Kurukshetra for many years, he turned towards natural farming which helped in enhancing the farm produce at zero cost with use of indigenous cows. He said under natural farming, farmers need not to spend even a single penny and it helps in rejuvenating the barren land and require minimum use of water.

Acharya Devvrat expressed deep concern over the excessive use of pesticides and chemical fertilizers which was not only diluting the healthy content of crops but also affecting soil fertility. A number of diseases like cancer and diabetes have increased rapidly during last few years due to unreasonable chemical farming and it was the right time to shift towards natural farming so that organic products could be made available for the consumers.

He said that besides increasing the farm production, natural farming has various other benefits as it helps in maintaining soil fertility, ground water level and preserving our environment. He said that scientists have already warned that there would be acute shortage of water after two decades and land would go barren if we would not think today for conserving water resources, soil fertility and preserving environment. Therefore, it was high time that we shift towards natural farming, he added.

The Governor earlier paid his homage to the 40 CRPF personnel who lost their lives in a terror attack in Jammu and Kashmir.

He was honoured by various social organizations on this occasion.