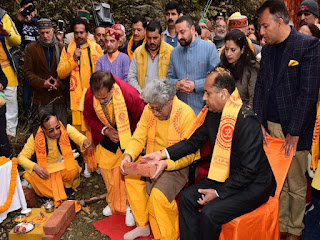 He said that in the present era of cut throat competition and materialistic world, moral value and traditions were eroding at a fast pace. He said that organization like Gayatri Parivar was rendering yeoman's service in upholding the age old traditions and value so that the Nation could once again become 'Vishva Guru'. He said that only those societies progress which respect their culture and traditions.

Jai Ram Thakur assured the Gayatri Parivar that the State Government would provide all possible help to the Organization for ensuring that the Gayatri Chetna Kendra becomes functional at the earliest.