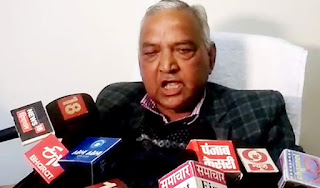 Shimla--The Vice Chairman of Himachal Pardesh Planning Board, Ramesh Dhawala termed the interim budget 2019-20 presented on Friday in the parliament by the union government as historic which meets the expectations of all sections of the society and would set the developmental agenda for the country for the years to come. He said this is an excellent budget which would take the nation on the path of progress and prosperity.

While addressing the media persons here today he said that the various major announcements have been made for farmers, poor, women, students, businessmen and middle class. These include a new deal for 12 crore small and marginal farmers with direct income support, a path breaking pension initiative for 10 crore unorganized sector workers, exempting income up to Rs 5 lakhs from income tax, reforms in stamp duty and highest ever budgetary allocation of Rs. 3 lakh crore for Defence.

A record allocation of funds at Rs 58,166 crore has been made for North Eastern areas and higher budgetary allocations for education, health, infrastructure and for the welfare of weaker sections including scheduled castes and scheduled tribes. He also welcomed the decision for creating a separate department of Fisheries for welfare of 1.5 crore fisherman, Dhawala  said .

He  added that the new scheme "Pradhan Mantri Kisan Samman Nidhi (PM-KISAN)" has been announced to extend direct income support at the rate of Rs. 6,000 per year to farmer families, having cultivable land up to 2 hectares. Setting up of "Rashtriya Kamdhenu Aayog" to upscale sustainable genetic upgradation of cow resources and to enhance production and productivity of cows is also a welcome step.