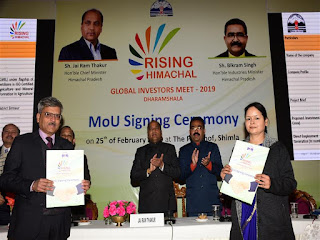 More than 40000 people to get employment

SHIMLA-----The State government was coming up with new policies for Industry, Tourism, Warehouse & Logistics, Aroma, Information Technology, Electrical Vehicle, Film, and Ayush to provide more attractive incentives to the entrepreneurs interesting to invest in the State. This was stated by the Chief Minister Jai Ram Thakur while presiding over the MoU signing ceremony under H.P. Global Investors Meet held here today.

Jai Ram Thakur said that being a small State Himachal Pradesh doing some big things and thus today the State was poised to emerge as the front runner State of the country. He said that being a hilly State with several geographical constraints but at the same time blessed with several topographical conditions offers the State immense potential for investment in various sectors. He said that the State offers several attractions for the investors. He said that the State was a Dev Bhoomi, with almost zero rate of crime, responsive and accountable administration and investor friendly industrial policy.

The Chief Minister said that the new Industrial Policy aims to establish state-of-the-art infrastructure, promote manufacturing sector, enhance inclusivity, foster innovation and create employment opportunities across the sectors. He said that entrepreneurs/ industrialists willing to setup new industry or undertaking expansion would be entitled to 30% Capital Investment Subsidy subject to maximum of Rs. 5 crore on their plant and machinery under Industrial Development Scheme of DIPP, Government of India.

Jai Ram Thakur said that the State government was Planning  Global Investors Meet during the month of June this year at Dharamshala which would focus on a wide range of upcoming and thriving sectors like Tourism, Electronics and Information Technology, Education and Skill Development, Healthcare and Ayush, Manufacturing, Pharmaceuticals, Infrastructure and Logistics, Power and Renewable Energy, Agro and Food Processing. He said that each of these sectors offers ample investment opportunities, while targeted sector-specific policy initiatives welcome and encourage investor interest.

The Chief Minister said that the State Government was endeavouring to make Himachal Pradesh one of the best investment destinations in India. The State places special emphasis on business partnerships for the development of micro, small and medium enterprises, he added. He said that since the present State Government came to power, it has put significant effort in improving ease of doing business in the State which was visible in the improved rankings done by the Government of India.

Jai Ram Thakur said that MoU was also signed under Corporate Social Responsibilities (CSR) Funds for preserving, publicising and managing four rich heritage monuments (Aaj Purani Rahoan Se) of the State viz Sapri Fort, Kalka Shimla Heritage Railway lines, Nirmand Parshuram Temple and Chitkul Village in Kinnaur. He said that this proposal is the first in leveraging the cultural heritage of the State under the Ministry of Tourism's "Adopt a Heritage Scheme" that seeks CSR funding by corporate houses.

The Chief Secretary B.K. Agarwal welcomed the Chief Minister and other dignitaries present on the occasion. He said that being the hilly State, Himachal Pradesh offers immense potential for the State. He said that the State has a vibrant talent pool and educational ecosystem. The state plays host to a diverse range of premier institutes of national repute such as IIT Mandi and IIIT Una, etc., he added.