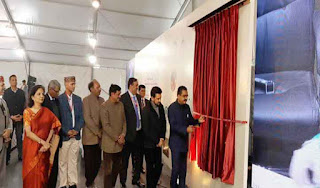 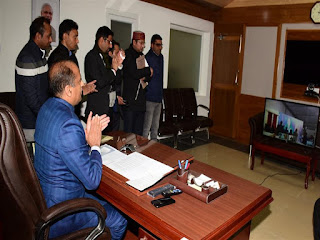 SHIMLA----The State Government was providing all possible assistance to the potential entrepreneurs to establish Food and Fruit Processing Units in the State so as to provide employment to the youth, besides strengthening the economy of the farmers and fruit growers.

This was stated by the Chief Minister Jai Ram Thakur while addressing the people through video conference from Shimla after inaugurating Cremica Food Park at Singha in Una district today. Union Cabinet Minister for Food Processing Smt. Harsimrat Kaur Badal was also present on the occasion through Video Conference from Delhi. This Park has been established on 51 acre land and Cremica Industries was investing Rs 110 crore on this Food Park.

Jai Ram Thakur said that this Food Park has been established under the Mega Food Park Scheme launched by the Government of India. He said that investment worth Rs. 300 crore was expected in the Food Park at Singha. He said that this would not only open new vistas of development in the area, but also ensure strengthening the economy of the farmers. He said that the farmers and fruit growers of the area would get remunerative prices of their produce besides the youth would get ample opportunities of employment.

The Chief Minister said that in order to tap the vast investment potential of the State in sectors such as Tourism, Hospitality, Resorts, Pharmaceutical, MSME, Engineering Tools, Information Technology, Health and Wellness Centers, Herbal and Ayurved based projects, Horticulture, Power Sector, Food Processing, Real Estate, Education etc. the State Government was Planning to organize a Global Investor's Meet on 10-11th June this year at Dharamsala.

Jai Ram Thakur said that one of the biggest advantages the State has was availability of quality power at most competitive rates in the country and this situation would continue for years to come considering the immense power potential available in the State. He said that the Single Window Monitoring and Clearance Authority was ensuring effective, transparent, timely and hassle free clearances to the entrepreneurs to get clearances for setting their 7 units in the State

The Chief Minister said that the State Government was going to organize an Investor Meet at Dharamashala during the month of June this year. He said that the industry captains would be invited in this investors meet and they would be showcased immense potential of investment in the State. He said that he had recently visited Bengaluru and Hyderabad to meet entrepreneurs and persuade them to invest in the State.