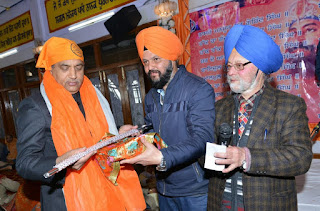 SHIMLA-----Himachal Chief Minister Jai Ram Thakur said that religion was very essence  of society and respect, reverence and dedication towards religion were essential. He was speaking at the function organized by Gurudwara Singh Sabha on the auspicious occasion of 352th Prakashotsva of Sri Guru Gobind Singh ji, at shimla  today. He paid obeisance  at  Guru Singh Sabha Gurudwara, Cart Road .

He said that Guru Gobind Singh ji has contributed a lot to his religion, society and the country. He said that the teachings of Guru Govind Singh ji were even more relevant today.

Jai Ram Thakur said that 550th Prakashotsva of  Shri Guru Nanak Dev ji will be celebrated throughout the country. He said that this Mahaparva will also be celebrated with great fervour in Himachal Pradesh to remember the contribution of Guru to the entire humanity and the state government would extend  all possible cooperation.

The Chief Minister also felicitated the people of the State on the occasion of Lohari and Makar Sankranti.