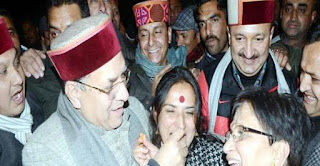 He said that it is due to hard work of the party workers that this victory has been registered after long time by the party in this ward.

Chief Minister said that state government is committed to the welfare of people and that is the reason people have reposed faith in the party. He urged the party workers to work hard and spread the policies programmes and achievements of state government to every nook and corner of the state.

He said that this sires of victory will continue in future also and party will win all four parliament seats in Lok Sabha elections.