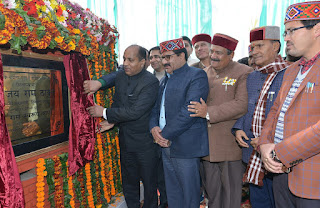 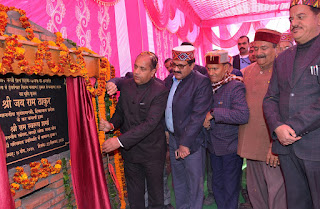 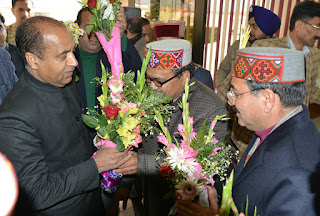 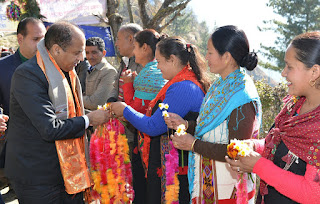 Shimla-----  The State Government would take up the matter of construction of Bhubujot Tunnel with the Centre so that the people of  remote Lag valley could be facilitated. Chief Minister Jai Ram Thakur stated this while addressing a public meeting at Dughilag in Lag valley of Kullu district today.

The Chief Minister said that present State Government was completing one year of office on 27th of this month. He said that one year back when he took oath as the Chief Minister of the State, Prime Minister Narendra Modi and top BJP Central leadership graced the oath ceremony held at Shimla. It was honour for our State that on the completion of one year of office, the Prime Minister was once again gracing the 'Jan Aabhar Rally' being held at Dharmashala on 27th of this month, he said. This shows the love and affection the Prime Minister shares with the people of the State, he added.

Jai Ram Thakur said that Prime Minister has always provided help to the State not only for its development but also helped the State at the time of distress. He said that seven helicopters were provided by the Centre to airlift the people stranded due to untimely snowfall in Lahaul valley and Holi in Chamba. He said that the Centre has also provided developmental projects worth Rs 9000 crore for the State.

Jai Ram Thakur said that Jan Manch has been a big success among the common man of the State as this has ensured redressal of their grievances nearer to their homes.

Earlier, the Chief Minister laid foundation stone of Multipurpose (Revenue  Collectorate) of Deputy Commissioner Office to be constructed at a cost of Rs 5.50 crore.  The Bhawan would have car parking in ground floor and shopping complex in first floor. The second floor would have five suits and third floor would have Conference halls.

He also laid foundation stone of renovations and restoration work of Deputy Commissioner's office which would be completed at a cost of Rs. 80 lakh.

The Chief Minister also performed Bhoomi Pujan of Dupkan to Dunkhari Gahar road to be completed by spending an amount of Rs 4.93 crore.

Forest and Transport Minister Shri Govind Thakur said that the State was fortunate to have Chief Minister from the Mandi Parliamentary Constituency for the first time after the formation of the State. He said that the State was witnessing all-round and equitable development under dynamic leadership of Jai Ram Thakur. He expressed gratitude that Kullu district was witnessing rapid pace of development for the last one year.

Ram Swaroop Sharma said that during the four and a half years he had strived hard at the Centre to raise developmental issues of the State. He said that the combination of Prime Minister Narendra Modi at Centre and Chief Minister Shri Jai Ram Thakur at the State was ensuring that Himachal Pradesh emerges as a front runner State of the country.

Former MP Maheshwar Singh also spoke on the occasion and detailed various developmental demands of the area. He also urged the Chief Minister for developing the area from tourism point of view.