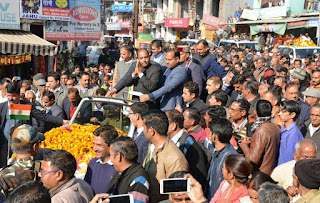 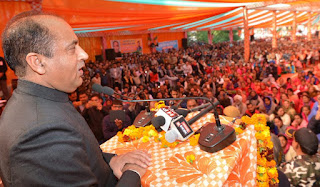 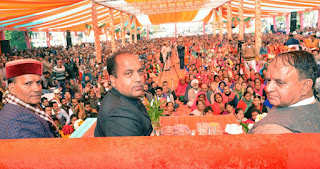 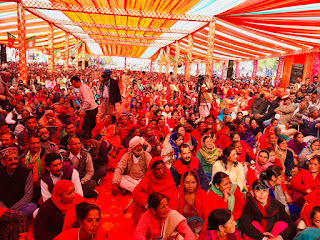 SHIMLA----    While addressing a largely attended public meeting at Baldwara in Sarkaghat Assembly constituency of Mandi district today, Chief Minister Jai Ram Thakur said that an additional amount of Rs. 26 crore has been sanctioned by the Centre for Sarkaghat Assembly constituency under PMGSY and a 33 KV Sub Station would be constructed at Semala to solve the voltage problem of the area. Chief Minister announced opening of IPH Sub Division at Badrota and PWD Sub Division at Badharwar.

The Chief Minister said that the State Government has submitted a project of Rs. 157 crore for channelisation of Seer Khud which would be sanctioned and implemented soon. He said that Rs. 85 crore project has also been posed for BRICS funding under Phase-II for Sarkaghat area.

Jai Ram Thakur said that the results of State Assembly elections held last year was not only a change of guards from Congress to BJP, it was also a generation change in leadership as well. The people of the State have entrusted this responsibility on his shoulder and he is working with complete dedication to come upto their expectations. He said that he is in State politics continuously for the last about twenty one years, and during this period he has worked with dedication and sincerity in whatever capacity he was asked by the central party leadership.

He said that the one year's tenure of the present State Government has ensured that all the areas of the State get their due share in matter of development. He has visited 63 Vidhan Sabha areas of the State to ensure personal contact with the masses. He said that the previous State Government due to its financial mismanagement left the State with a loan burden of Rs. 46,500 crore and announced twenty one degree colleges during the last few months of its tenure without any budget provisions. Now, the same Opposition leaders were trying to intimidate the Government on name of charge sheet on the functioning of one year of the Government. The fact is that the opposition has nothing adverse to say against the government, he added.

Jai Ram Thakur said that the Government was celebrating one year in office in a befitting manner in which Prime Minister Narendra Modi would be gracing the occasion at the state level function at Dharamshala on 27th of this month. He said that Jan Manch programme of the State Government has proved successful in redressal of public grievances. Even the Congress leaders are participating in it for redreassal of their grievances, he quipped.

The Chief Minister said that Grihini Suvidha Yojna has been launched for providing free gas connection to the left out families of Ujjawala Yojna and would provide benefit to over one lakh households of the State. The state government at its level has launched Him Care for providing health cover to those families which have not been covered under Ayushman Bharat, he added.

Earlier, the Chief Minister laid foundation stone of 33KV Sub Station at  village Talao to be constructed at a cost of Rs. 2.55 crore. This would solve the voltage problem of over 20,000 people of 35 villages of 15 Panchayats of the area. He also laid foundation stone of 40 meter long bridge over Jabothi Khud on Bahi-Sulpur road to be completed by spending Rs. 2.17 crore and of Combined Office Building Baldwara to be completed by spending Rs 14 crore.

He inaugurated lift water supply scheme to partially covered habitations of Baldwara, Khudla and Jehmat constructed at a cost of Rs. 1.60 crore.

The Chief Minister announced upgradation of veterinary dispensary Ponta to veterinary hospital and construction of indoor stadium at Degree College Sarkaghat, upgradation of Police Post Hatli to Police Station, and constructions of PWD Rest house at Baldwara. He announced that science blocks would be constructed in five Senior Secondary Schools of the area in a  phased manner.

The Chief Minister also announced that additional amount of Rs 4.5 crore would be provided for construction of college building at Degree College Sarkaghat in next budget. He announced opening of Atal Adarsh Vidya Kendra in Sarkaghat constituency.

The Chief Minister was honoured by several political, social and cultural organisations on the occasion.

Irrigation and Public Health Minister Mahinder Singh Thakur said that the people of Mandi district were blessed to have Jai Ram Thakur as Chief Minister of the state and they have lot of expectations from him.  He said that the State Government has succeeded in getting approved about Rs. 1900 crore scheme for development of horticulture in lower areas of the State. He said that the State Government was taking effective steps of water conservation. He urged the Chief Minister for channelisation of Sheer Khud which is causing great damage to the land of people of the area.

Member of Parliament Ram Swaroop Sharma said that Sarkaghat area is also known as the Vir Bhoomi as thousands of youth from the area are serving in the Armed Forces. He said that it was during the tenure of Jai Ram Thakur as President of the State BJP that the BJP came to power with absolute majority in 2007. Now, the state government under the dynamic leadership of Jai Ram Thakur has launched several schemes for welfare of the State and its people.

MLA's Vinod Kumar and Jawahar Thakur, Director, BoD of State Cooperative Bank Priyavrat were also present on the occasion among others.