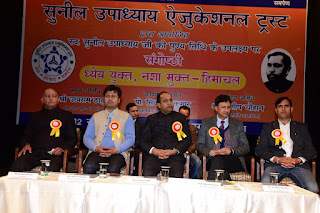 SHIMLA-----Drug abuse is a serious social problem and to prevent this evil, every person of the society must contribute significantly. This was stated by Chief Minister Jai Ram Thakur while presiding over the symposium 'Dhyey Yukt, Nasha Mukt Himachal' on the occasion of the death anniversary of Sunil Upadhyaya. The symposium was organized by Sunil Upadhyaya Educational Trust in the historical Gaiety Theater, here today.

The Chief Minister said that the State Government was concerned over the problem of drug abuse by a large number of youth and is constantly trying to curb the evil. He said that although many laws are in force to punish drug peddling but there is a dire need to implement these laws effectively. He said that if the need arises the law would be made more stringent, so that the enemies of the younger generation can be put behind the bars.

Jai Ram Thakur said that one-third cases of the drugs trafficking registered in the state have neighbouring states connection, which is also a cause of concern for the government. He said that on his initiative a meeting was organized in Chandigarh along with Chief Ministers of Punjab, Haryana and Uttarakhand to formulate a joint strategy to deal with the drug menace. He said that now the time has come to launch a big campaign across the country against drug abuse. He said that to eliminate this evil from the root, every person had to cooperate and each family must involve in it.

While paying tribute to Sunil Upadhyay on this occasion, the Chief Minister said that he was a multi-faceted personality and his contribution to the society and Himachal Pradesh regarding ideology was unforgettable. He influenced the whole student politics at a young age and laid a strong foundation of organization in the state. He said that the age of a person doesn't matter so much, but it matters how one has contributed in social care. The Chief Minister said that during his studies at Mandi College, he met Sunil Upadhyay in person in a meeting of ABVP and he still remembers those moments.

On this occasion, the Chief Minister also honoured many people for their outstanding work in social field. He appreciated the activities of the social concern being run by trust. He announced Rs 51,000 for the trust to promote social activities.

Vice Chancellor of HPU Prof. Sikandar Kumar in his presidential address said that drug abuse is not a solution to any problem, but it destroys a person. The drug addicts ruin not only themselves but the whole family. He said that if this menace was not stopped in time, then we would lose our future generation. He urged the youth to make the struggle a part of life to stay away from this evil, which can lead to the top.

While talking about the legacy of ABVP, National General Secretary Ashish Chauhan said that the contribution of Sunil Upadhyay will always be remembered by the country and the state. In a short span of his life he had given a new direction to the ideology of the organization.

Sunil Upadhyaya Educational Trust Vice President and Advocate General of H.P. High Court Ashok Sharma welcomed the Chief Minister and other dignitaries while Secretary of the Trust Dr. Surendra Sharma presented the vote of thanks.