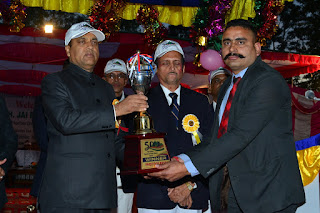 ·        1000 Police personnel will be recruited in State Police Department

SHIMLA----Chief Minister Jai Ram Thakur while presiding over the closing ceremony of 50th Himachal Pradesh Police Sports Meet held at Dharamshala in Kangra district here today said that one thousand Police personnel would be recruited in the State Police Department soon to ensure smooth functioning of the Department. He announced establishment of Police Housing Corporation in the State. He said that Rs. 50 crore would be provided for police housing in the State.

Jai Ram Thakur said that the Union Government has sanctioned an Batallion of NDRF for the State so as to meet the challenges due to natural calamities. He said that the State Government would ensure better empowerment of Police Constables in the State.

Chief Minister also released the souvenir brought out by the organisers of the Police Sports Meet on the occasion.