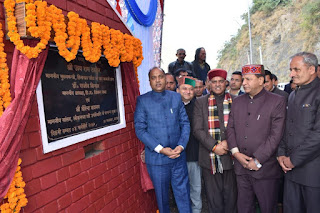 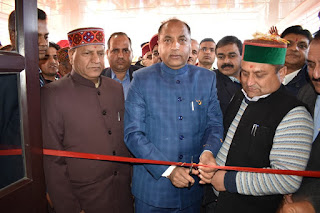 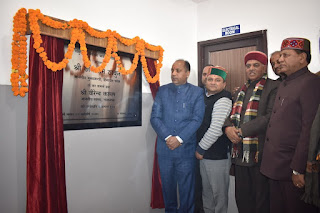 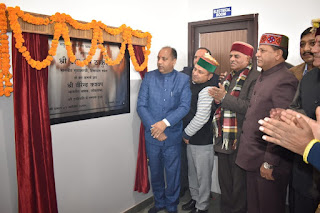 SHIMLA-----Rs. 183 Crore were being spent under various projects for the improvement of roads in Renuka constituency so as to provide better facilities to the people. Chief Minister Jai Ram Thakur stated this while addressing the gathering after inaugurating Mini Secretariat building constructed at a cost of Rs. 6.77 Crore at Sangrah in district Sirmaur. He said that Mini Secretariat would ensure various services under one roof. Earlier, he also laid the foundation stone of double lane bridge constructed at the cost of Rs. 14.27 Crore on Renuka Ji Giri River in Nahan-Dadahu-Haripurdhar road.

The Chief Minister said that the present government have introduced 30 new schemes in the budget and implementation of these schemes has already been started to ensure better facilities at their door-steps of people of rural areas. He said that development was a continuous process and State government had created a history by getting sanctioned developmental projects worth nine thousand crores for the State during the tenure of only ten months which would further intensify the pace of development in the state.

He urged the youth to stay away from any kind of drugs and make their life worthwhile. He said that drugs of any kind lead to destruction of life and to curb this menace the State government had undertaken various campaigns. These campaigns would help in fighting against drugs in order to save the youth from this social vice. He said that meeting of Chief Ministers of four states was held in Chandigarh to chalk out the joint strategy to fight against drug abuse.