CM requests for early launch of UDAAN-2 in Himachal 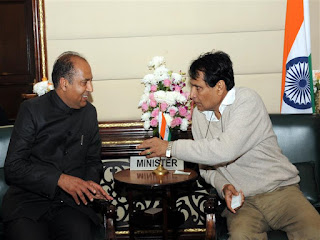 CM requests for early launch of UDAAN-2 in Himachal

SHIMLA----Chief Minister Jairam Thakur called on Union Minister for Civil Aviation  Suresh Prabhu in New Delhi today and requested for expediting the formalities for early launch of UDAAN – 2 project in Himachal Pradesh. He said that connectivity is a major issue in the state and air connectivity is vital for boosting tourism sector.

He apprised the Union Minister that there was huge delay in submission of DPRs and completion of other formalities in UDAAN – 2 project and requested for making stop gap entry arrangements for starting helicopter services by operating intervening helipads for providing connectivity between Chandigarh – Baddi/Kasauli – Shimla – Kullu – Dharamshala.

Chief Minister also took up the matter of international airport at Mandi and conducting Obstacles Limitation Survey at the earliest for hastening the process for further clearances. He also urged for looking into providing technical solutions for expansion of Shimla airstrip for facilitating bigger air-crafts.

Suresh Prabhu assured of conducting Obstacles Limitation Survey at the earliest and directed the officers of the Ministry to work out an immediate solution for executing stop gap entry arrangements and speedy launch of UDAAN – 2.