Officers should speed up pace of ongoing works :CM 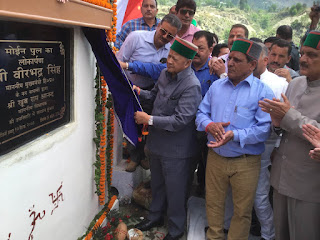 Officers should speed up pace of ongoing works :CM

KULLU----Officers should speed up the pace of ongoing works and complete the development projects soon. The forest department should also put in sincere efforts to grant forest clearances for roads and other development works, stated Chief Minister Shri Virbhadra Singh while addressing public meeting at Moein in Ani assembly constituency of Kullu district. He announced construction of road from Moein to Nither and directed to complete the same as soon as possible and said that the road upto Gothna village would also be constructed. There would not be any dearth of funds for the road upto Nither from Moein and whatever money would be required, the Government would sanction the same, he added.

MLA, Shri Khub Ram welcomed the Chief Minister to his constituency and thanked him for dedicating the much awaited Moein Bridge which was pending since 1980.

He also urged Chief Minister for veterinary dispensary for Moein.