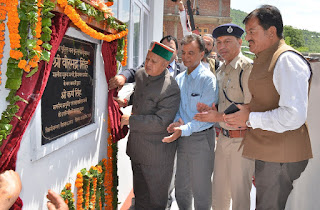 Shimla----While addressing public meeting at Mohal in district Kullu today, Chief Minister, Shri Virbhadra Singh said that every drop of water was precious and had to be saved adding that all the irrigational schemes in the state should be completed at the earliest. He said that all those officers who work dedicatedly and complete work in time-bound manner would be honoured.

The Chief Minister directed the Irrigation and Public Health Department to complete all the ongoing schemes on priority. Besides, he also directed the PWD department to complete the ongoing civil works as soon as possible. He said that development was never ending and a continuous process and the departments concerned should complete their targets within stipulated time . All the works the foundation stone of which were laid by him should be completed within a year or two he said.

Earlier, while speaking on the sidelines of the function, Chief Minister said that the government was aware of the problems of the taxi operators, kiosk owners, pony riders and others, after the ban by National Green Tribunal (NGT) on Rohtang Pass and had taken up the matter with the NGT. However, he said that the encroachments on the government land had to be removed. The chief minister said that the encroachments must be vacated. He said that he was well aware of those who were trying to raise hue and cry on the four lane issue and trying to make a mountain out of a molehill.