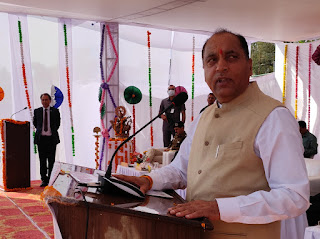 Construction work of campus of CUHP would start soon at Dehra and Dharamshala: Jai Ram Thakur

Jai Ram Thakur congratulated the players who took part in this competition. He also said that the players are expected to return with good memories of this competition and Dharamshala itself. CM congratulated the team of the Central University for the successful conduction of the Championship. He said that organizing sports in Tourism City like Dharamshala is also beneficial for the sportspersons as they get closer to the environment.

Chief Minister said that it took a long time to establish the Central University of Himachal Pradesh (CUHP) campus but now without delaying it any further the construction work of campus would be started soon in both at Dehra and Dharamshala. He appreciated the efforts of Prime Minister Narendra Modi in efficiently dealing with the Covid-19 pandemic and vaccination drive.

Congratulating the winning and runner-up team, the Chief Minister felicitated the winners of the event, Mumbai team with the Gold Medal and the runner-up team Savitribai Phule University, Pune was awarded with the Silver Medal. Meanwhile, Shivaji University, Kolhapur along with Davangere University secured the third position and received the Bronze Medal.

The Chief Minister along with other dignitaries released the News Letter of the University.

Former Chief Minister Shanta Kumar, while calling upon the Chief Minister Jai Ram Thakur, said that the construction work of the campus building of CUHP should be completed at the earliest. While addressing the players, he said that the players have to play game with sportsman spirit and victory and defeat is secondary while participation with goodwill is essential. While congratulating all the players who participated in this competition, he inspired them to live their life with the sports spirit. Encouraging the students he said that hardships are part and parcel of life and one have to face them boldly and added that, "Speed is calculated miles per hour, Life is calculated Smile per hours."

Earlier, the chief patron and welcome president of the function and Vice Chancellor of CUHP, Prof. S.P. Bansal honored the guests with shawl and Himachali cap.

Dean of Student Welfare Prof. Pradeep Kumar gave the vote of thanks.

Mumbai University has won the Inter University Regional Men's Kho-Kho Championship by defeating Savitribai Phule University, Pune by 18-12. This championship was organized by Central University of Himachal Pradesh (CUHP) under the aegis of Association of Indian Universities, New Delhi.

The four day long championship began from March 27 witnessed the tremendous matches between a total of 16 teams from 4 zones. In the jury of the match, Sukhdeep Singh was referee, Amrik Singh and Vijay Kumar was umpire, Anil Sharma was time keeper and Surendra Singh and Vimala Devi were scorers.