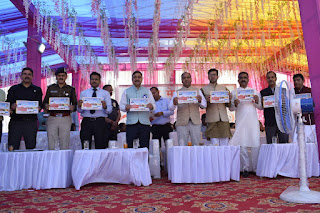 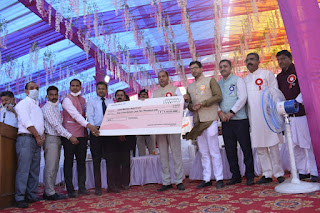 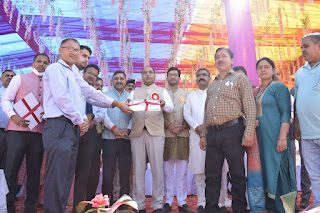 CM presides over concluding function of SARAS Mela-2022 at Dharamshala

Dharmshala----Under ambitious Mukhya Mantri Swawlamban Yojna, financial assistance to the tune of over Rs. 100 crore has been disbursed for setting up of various self-employment ventures in the state during last 3 years. This was stated by Chief Minister Jai Ram Thakur while presiding over the concluding function of SARAS Mela-2022 at police ground Dharamshala today. He said that this scheme had proved to be very result-oriented and precursor of creating the self-employment avenues especially to unemployed youths across the state.

Jai Ram Thakur called upon women to come forward for taking the benefits of Mukhya Mantri Swawlamban Yojna as the subsidy amount comparing male beneficiary is higher for them. He said that SARAS Mela not only provide a platform for selling various products of self-help groups but also create an opportunity of marketing. Appreciating the step taken by district administration to organize 10-day SARAS Mela, the Chief Minister said such events can transform the rural economy also. He said the government has decided that self-help groups would be given additional revolving fund of Rs. 25000 each as top up from the next financial year.

On the demand of reviving the summer festival at Dharamshala by MLA Vishal Nehria, Chief Minister directed the district administration for taking the steps to organize summer festival.

Chief Minister visited all the stalls in SARAS Mela by self-help groups from various states including Himachal Pradesh. He also gave away the prizes to development blocks of district Kangra under Maharishi Valmiki Swachhata Puraskar Yojna and Balika Gaurav Puraskar Yojna.

Earlier, Chief Minister laid foundation stones of Rs.3.28 crore MBA block of government degree college Dharamshala and Computer Science and Engineering block to be constructed at the cost of 3.76 crore.

He said that degree college Dharamshala would also be named after any renowned personality soon. He said construction of electronic voting machine (EVM) ware house would be completed within next 3 months. After the completion, EVMs would be shifted to newly constructed ware house.