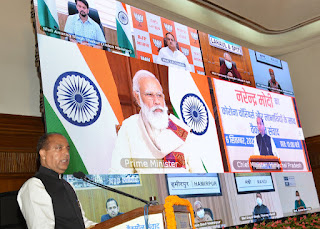 Himachal to achieve inoculation of second dose of vaccination by November, 2021: CM

While congratulating the state government and people of the state, Sh. Modi said that Himachal Pradesh has emerged as a champion to have administered first dose of corona vaccine to its eligible population. He expressed hope that Himachal Pradesh would also be the first state in inoculating second dose of the Covid vaccine. He said that the state was able to achieve this target due to effective implementation of the vaccination drive by the state government and public awareness.

He appreciated the efforts of the state government in successful implementation of the vaccination drive and said that he has witnessed Himachal struggle for meagre facilities and was now on the path of rapid development.

Himachal has become the first state in India to have administered at least one dose of corona vaccine to its entire eligible population. Not only this, in the case of second dose also Himachal has crossed almost one third of the population. This step of Himachal Pradesh has made us realise the importance of self reliance, he added.

Prime Minister said the state has connected science with culture and increased the self-confidence of the country. Himachal Pradesh showed belief in its potential and achieved the target. This achievement is a result of the strong determination of each and every person. Women also played an important role in it. He appreciated the arrangements made by the state government, despite hilly terrain of the state. Himachal has ensured the fastest vaccination, without wastage of the vaccine. Mass communication and public participation are a huge factor in the success of vaccination campaign.

He said that faith, education and science can bring a massive change, which has been proved in Himachal Pradesh.

Prime Minister said that speedy vaccination drive and communication would be beneficial for the state. He suggested the state to use drone technique in land survey and encourage research related to early warning system regarding landslides. He laid emphasis on importance of organic farming and said the farmers of the state like the soldiers of Himachal Pradesh were also playing a vital role in protecting our soil.

He said that today India is making a record by administering 125 crore vaccines in a day. Himachal has expressed belief in its own ability and trusted its health workers and scientists. The credit of the success goes to doctors, para-medical staff and women of the state. The people of Himachal did not allow any rumour, any misinformation to survive. Himachal is an evidence that rural society was strengthening the world's biggest vaccination drive, which would benefit the tourism of the state but the people should continue following the covid guidelines.

Prime Minister emphasised on improving connectivity and usage of modern techniques in developmental works. He said that drone would prove a boon in far flung areas of the state and would prove beneficial in health, agriculture and horticulture sectors. Besides this, it can also be used in delivering life saving medicines and essential commodities with ease in far flung areas.

He said that many meaningful results can be obtained by connecting the village and the community. He also spoke of successful implementation of Jal Jeevan Mission in the state and exploring the potential in the forests of Himachal especially for herbs and increasing the participation of villages and self-help groups. He urged the farmers and horticulturists of the state during the nectar of independence to make agriculture of Himachal Pradesh organic in the next 25 years.

On this occasion, Chief Minister Jai Ram Thakur while welcoming the Prime Minister thanked the Prime Minister for interacting with the people of the state. He said that due to the dynamic leadership and far-sightedness of Prime Minister Narendra Modi, India has successfully produced the vaccine to deal with the global corona pandemic in a short duration. Due to these efforts, Himachal Pradesh has achieved the target of vaccinating 100 percent of its adult population with the first dose of Covid vaccination.

He said that as a result of continuous supply of vaccine from the Government of India, Himachal Pradesh achieved the target of inoculating the first dose of vaccine to 18 plus population.

He said that to achieve this target the ground work was done from enhancement of capacity of cold chain plant, transportation facility and human resource along with encouraging beneficiaries to get them vaccinated. The programme was started with the nationwide launch by Prime Minister Narendra Modi on January 16, 2021.

The Chief Minister said that the Prime Minister gave strength to the entire nation and due to the concerted efforts of the health workers and the entire team involved in this campaign, the state was successful in achieving this goal. He expressed hope that by the end of November, the target of inocultaing second dose of vaccine to cent percent adult population of the state would also be achieved.

He said that the health teams up to the level of vaccination center were specially trained for zero wastage, as a result of which zero wastage of vaccine was ensured in the state. He said that efforts were made to spread awareness by providing right information and education in the areas where there was scepticism in regards to Covid vaccination. He said that with the effective guidance of Prime Minister Narendra Modi and with the cooperation of the Central Government, the State Government kept the economy smooth and did not let the vaccination campaign slow down.

Chief Secretary Ram Subhag Singh conducted the programme and presented vote of thanks.

A documentary film based on the vaccination campaign in Himachal was also screened on this occasion.

This programme was displayed live through 135 LEDs in all the districts of the state.