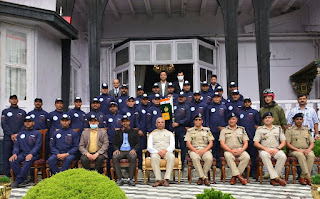 Shimla---The flag-in ceremony of the Mountaineering Expedition of Sector Headquarters Shimla, Indo Tibetan Border Police (ITBP) was organized at Raj Bhavan today, which was presided over by the Governor, Rajendra Vishwanath Arlekar.

The team of 28 members succeeded in reaching 'Gya Peak', which is 6794 meters high. This peak is considered to be one of the toughest and technical peaks to climb and the team was flagged-off on 24 July 2021 by Prem Singh, DIG, SHQ Shimla. This team departed to Chumar on 24 July 2021 and after rigorous and tough route summited the peak on 12 August 2021. Nine members of the team successfully summited the peak under the leadership of Deputy Commandant Kuldeep Singh and Deputy Leader Assistant Commandant Anmol Shrivas. Veteran member in the team was Head constable Pradeep Negi of border village Chitkul in district Kinnaur, who has also successfully scaled world's highest peak "Mount Everest" twice in the past.

On the occasion, the Governor congratulated all the team members and gave his best wishes for the bright future. He said that such expeditions not only develop leadership, bonding, discipline and confidence among the troops but also enhance the ability to face uncertain and critical situations by taking initiative. He said that the mountaineering expedition has created awareness about the environment and cleanliness. He appreciated ITBP for various relief and rescue operations conducted in Himachal Pradesh and protecting the integrity of Indo-Tibetan borders.

Shri Arlekar said that ITBP personnel were rendering their services in tough and difficult conditions and we all are proud of them.  They have a glorious past which the younger generation should be aware of. He said expedition-like activities create enthusiasm and motivate the youth as well. He said that by organizing such an expedition despite the pandemic was certainly a positive message for society and the country.

Prem Singh welcomed and honoured the Governor and detailed activities of ITBP. He apprised that ITBP holds specialization in adventure sports like rock climbing, mountaineering, skiing, river-rafting, mountain biking and paragliding etc. and also conducts various events. He added that ITBP personnel have made the country proud on various occasions by participating and winning National and International events.

The expedition team also displayed mountaineering equipment and the Governor evinced keen interest in it.

Priyatu Mandal, Secretary to Governor and other senior officers of the ITBP were also present on the occasion.