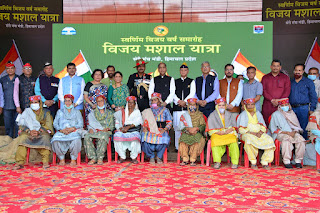 Shimla----Chief Minister Jai Ram Thakur today received the Victory Flame on the occasion of 'Sawrnim Vijay Varsh' being celebrated to commemorate the 50 years of India's historic victory over Pakistan  at Seri Manch in Mandi today. The historic Seri stage was decorated tastefully to welcome the Vijay Mashal Yatra.

While addressing the people on the occasion, Chief Minister said that this event was being celebrated to commemorate 50 years of India's historic victory in the 1971 war.  He said that event not only commemorates India's spectacular victory over Pakistan in 1971, but it also tells the tale of the birth of Bangladesh. He said that this victory was a living document of the strategic skill and valour of the Indian soldiers. He said that the Golden Victory Year celebrations began on 16th December, 2020 by lighting the 'Victory Torch' by the Prime Minister Narendra Modi and since then Vijay Mashal has been travelling across the country.

Chief Minister said that the brave sons of the state have made an unprecedented contribution in getting Himachal the honour of being Vir Bhoomi.  He said that since the attainment of independence, about 1700 heroes of Himachal have laid down their lives for the country. He said that the valour of the soldiers of the State was evident from the fact that the sons of the state have received 4 Param Vir Chakra, 2 Ashok Chakra, 11 Mahavir Chakra and 23 Kirti Chakra.  A total of 1111 soldiers of the state are honoured with various medals, he added.

Jai Ram Thakur said that during the Indo-Pakistan War of 1971, 261 heroes of Himachal had sacrificed their lives.  He said that the State today have 121944 ex-servicemen, 923 Veer Naris and 36731 other military widows.  He said that during the Kargil war, 52 heroes of Himachal made the state proud by sacrificing their lives.  During this war, the soldiers of the State won 2 Param Vir Chakra, 6 Vir Chakra and 12 Sena Medal and one Mention-in-Dispatch.

Chief Minister said that the State Government has started several schemes for the welfare of ex-servicemen.  He said that employment opportunities were being provided to the ex-servicemen of the state and the dependents of the soldiers by providing them reservation in Government jobs.  He said that nation was today fortunate that it was being led by a strong leader in form of Prime Minister Narendra Modi.

Chief Minister also honoured the kins of the 1971 war martyrs on the occasion.

He also flagged off cycling expedition on the occasion.

Lt. General P.N. Ananthanarayanan General Officer Commanding 16th Rising Star Corps, Yol said that the 1971 war with Pakistan was turning point for India as it established its supremacy over Pakistan. He said that the State of Himachal Pradesh was not only the 'Dev Bhoomi' but also a 'Vir Bhoomi', with lakh of youth of the State serving the Armed forces of the country.