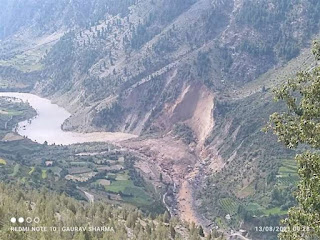 Chief Minister said that on receiving the information of the incident, the team was immediately sent to take a stock of the situation. He said there was gradual improvement in the flow of the river. He said the district administration has been directed to ensure that no further damage is caused due to the situation.

Chief Minister has appealed the people to avoid going near river bank and landslide prone areas.