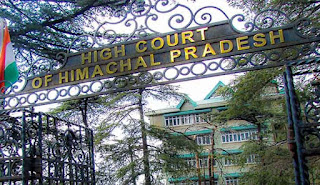 SHIMLA-----The  High Court of H.P. has directed the  State Government to re-consider  its decision of holding  'Maa Chintpurni Sawan Mela' in District Una,  keeping in view the precarious situation, as  large congregation of devotees may act as a catalyst for the growth of  Covid-19 virus.  The Court directed the State  Government  to consider the  decision as expeditiously as possible, preferably before 13th August, 2021.

The Division Bench comprising Acting Chief Justice Ravi Malimath  and Justice Jyotsna Rewal passed these orders on a public interest litigation and other petitions highlighting the inadequate facilities and infrastructure in the State of H.P., to deal with the Corona pandemic.

During the course of hearing,  Ld. Amicus Curiae  said that as the  schools have been closed by the State by reviewing its earlier decision, the "Maa Chintpurni Sawan Mela" going to be held on August 16, be also suspended for the time being as lakhs of devotees would visit the temple. The Senior Additional Advocate General informed that the Deputy Commissioner, Una has taken a conscious decision and this is not Mela in  true sense, since the devotees are permitted only to visit the temple and all other activities have been suspended.

The Court observed that  keeping in mind the precarious situation, it would  be appropriate if  the Government re-examines the issue and thereafter takes a decision,  in the larger interest of the public   and to ensure that the pandemic does not cause   any further damage.

The State Government also informed the Court that, so far, 20 children have been identified,  who have become orphan due to COVID-19. Out of these 20 orphan children, 19 children have been placed under Foster Care in their extended families and are entitled for the financial assistance @ Rs.4400/- per month, out of which Rs.  2500/- per month, are given to the foster parents  for the maintenance of the child and Rs.1500/- per month are being given as RD in the name of the child till the age of 18 years. He stated that  one  child is eligible for getting family pension from the Government, hence he could not be placed under foster care and  is living with his paternal uncle.

He further stated that 717 semi orphan children, have been identified, who have lost one parent due to COVID and at present there is no provision under foster care scheme  for providing financial assistance to semi-orphan children.   However, out of these 717 children, 37 have been placed under Mother Teresa Asahaya Matri Sambal Yojana under which Rs.6000/- per child are paid annually. Under this Yojna only such semi orphan children are being covered who have lost their fathers due to Covid-19 but the mothers are alive and their family income does not exceed Rs.35,000/- per annum.  The  Senior Additional Advocate General submitted  that more efforts would be put in by the State to offer a better standard of living to these children.

The Court also directed the State to submit information  regarding implementation  of Hon'ble Apex Court's Orders, for   constitution of  an expert team of doctors and other experts for inspection, supervision etc. , for  Proper Treatment of Covid-19 patients and Dignified Handling of Dead Bodies in the Hospitals.