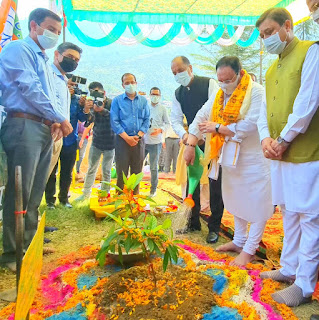 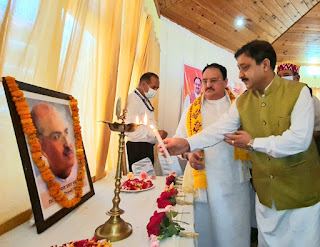 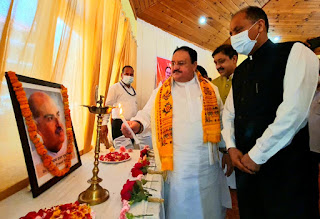 SHIMLA----MP and National BJP President Jagat Prakash Nadda and Chief Minister Jai Ram Thakur on the occasion of birth anniversary of Dr. Shyama Prasad Mukherjee, founder of Jan Sangh paid respect to the great son of the Nation by paying floral tributes on the portrait of this great leader at River Rafting Centre of Mountaineering Institute at Pirdi near Kullu today.

National BJP President said that Dr. Shyama Prasad Mukherjee demanded the partition of Bengal in 1946 to prevent the inclusion of its Hindu-majority areas in a Muslim-dominated East Pakistan. He said that Dr. Mukherjee strongly opposed to Article 370 seeing it as a threat to national unity. He fought against it inside and outside the parliament.

Earlier, the National BJP President and Chief Minister planted saplings of  'Rudraksh' in the Institute Complex at Pirdi, to mark the occasion.