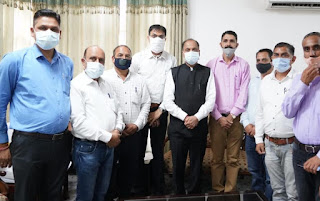 SHIMLA---     The representatives of various teacher's associations of the State called on Chief Minister Jai Ram Thakur at Mandi today. While addressing them, the Chief Minister said that his government and he himself had great regard for the teachers. They were the nation builders and they did not let the studies of the students get effected by effectively running the 'Har Ghar Pathshala' programme during the pandemic.

The Chief Minister said that the teacher's had given their services in every sector during this testing time. The state government was committed for their welfare and they had been given various benefits from time to time. He said that all the genuine demands of the teacher's had been fulfilled and the government was committed to redress their demands in the future as well.

In a joint statement, these Associations have said that after the statement of a senior minister of the state government and keeping in view the mediation by the Chief Minister, they have decided to end their protest. The Teacher's Associations have also announced that now no rhetoric would be made by Teacher's associations.