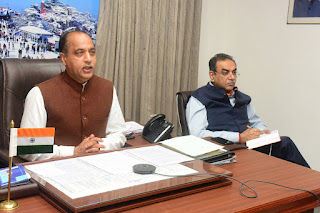 Announces to enhance tribal allowance and winter allowance for employees

SHIMLA----The 27th July, 2021 would go down as a momentous day in the annals of Kaza area of Lahaul Spiti district, when Chief Minister Jai Ram Thakur inaugurated and laid foundation stones of  19 developmental projects worth about Rs 146 crore for people of Spiti valley in Lahaul-Spiti district, virtually from Shimla as he could not visit Kaza  personally due to inclement weather.

While addressing the people virtually from Shimla, Chief Minister announced enhancement of tribal allowance from Rs. 450 to Rs. 650 and winter allowance from Rs. 300 to Rs. 500 for the employees serving in the tribal areas. He also announced opening of Health Sub Centre at Kemo, opening of Fire Sub Station at Kaza, upgradation of Community Health Centre Kaza to Civil Hospital.

He said the State Government would evolve a mechanism for engaging local labour in tribal areas so that pace of development does not hamper. He said that matter regarding 'Nautor' right to tribal people would also be considered sympathetically.

Chief Minister said that during the last about three and a half years, despite the corona pandemic, the State Government ensured that the pace of developmental goes uninterrupted. He said the State Government virtually inaugurated and laid foundation stones of projects worth Rs 4000 crore in over 42 Vidhan Sabha areas of the State from Shimla. He said that this was done to ensure that the developmental activities continue to go on uninterruptedly. He urged the people to strictly follow  Covid-19 appropriate behaviour as the pandemic was not yet over. He said that every programme and policy of the present state Government was aimed at upliftment of every section of the society with special focus on the poor and downtrodden.

Co-Incharge State BJP Sanjay Tondon congratulated the people of Lahaul-Spiti  district for achieving cent percent target of Covid-19 vaccination for 45 years and above age group. He said that Spiti area of the State has immense tourism potential and efforts must be made to give boost to tourism development in the area. He said that the Atal Tunnel has proved a boon to the people of Lahaul Spiti district and credit of this goes to the vision of late Prime Minister Atal Behari Vajpayee and efforts of Prime Minister Narendra Modi for this commitment to complete this project.

TAC Member and District BJP President Rajinder Bodh also welcomed the Chief Minister and other dignitaries present on the occasion.