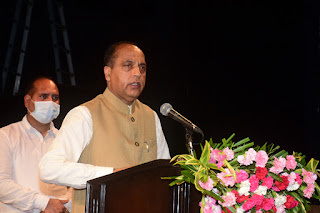 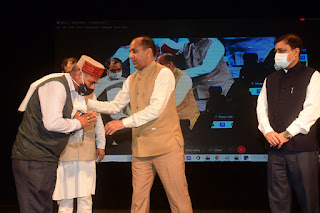 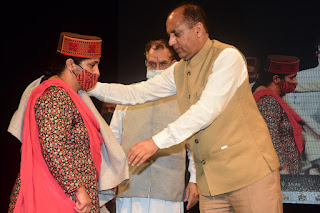 The Chief Minister said that the Kargil war was a symbol of valour and bravery of the Indian soldiers and on this day of Kargil Vijay Diwas we salute the brave soldiers of our armed forces.  He said this victory saga was written 22 years ago at the peaks of Kargil and would be motivating the generation to come. He said that in 1999 after the Pakistani intruders infiltrated the Indian peaks, the Indian soldiers initiated Operation Vijay against them on 8th May, which went on till 26th July, 1999.

Jai Ram Thakur said that the victory achieved during Operation Vijay was the victory of the bravehearts of the country. He said that those who safeguard the lives of future generations are always remembered for their gallantry. During the war 527 braves soldiers were martyred and more than 1300 were injured. He said that Himachal Pradesh is known as Vir Bhumi and has always followed the tradition of courage and sacrifice.

The Chief Minister said that out of 527 soldiers martyred during Kargil War, 52 martyrs were from Himachal Pradesh and out of four Param Vir Chakra winners two were from the State. Captain Vikram Batra was one such braveheart from Himachal Pradesh's Palampur, who sacrificed his life for the country. He said that  Hawaldar Sanjay Kumar of District Bilaspur was also honoured with Param Vir Chakar, for his gallantry during Kargil War.

Jai Ram Thakur said that it was a matter of great pride for Himachal Pradesh that till date the state has received 1096 gallantry awards and 1246 soldiers of the state have made supreme sacrifice for the country.

He said that Rs. five lakh each were provided to family members of the 52 soldiers martyred during the Kargil war and 12 soldiers with more than 50 percent disability were provided with ex-gratia grant of Rs. 2.5 lakh. He said that six such soldiers with less than 50 percent disability were given ex-gratia grant of rupees one lakh each. Out of 52 families of martyrs, one member of each 44 families have been provided employment and 9 disabled soldiers have also provided with employment.

Chief Minister said that under a special scheme of the Union Ministry of Petroleum and Natural Gas, a provision of providing petrol pump and gas agency has been made for the dependents of martyred soldiers of Kargil war and other military operations. About 28 dependents of martyred soldiers have been provided gas agencies and petrol pumps through the Department of Food and Civil Supplies in the state. Besides, this several ex-gratia grants were being provided by the state government to dependents of war martyrs and martyrs of other military operations.

Urban Development Minister Suresh Bhardwaj said that the country has faced several wars in which the Indian soldiers displayed great courage and fought tirelessly to protect our motherland.

Artists of the Information and Public Relations Department sang patriotic songs and a documentary was also showcased on this occasion.