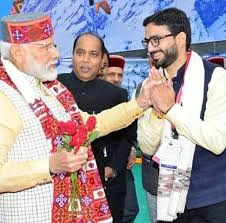 The Himachal Pradesh State Commission for Women  sought report from Kangra superintendent of police over the allegations that Dharamshala BJP MLA Vishal Nehriya tortured his wife. This came even as opposition Congress held a protest demanding suspension of Nehriya from the Assembly and his immediate arrest. The Congress also demanded a high-level probe into the matter.

Women Commission chairperson Daisy Thakur told that they took suo motu cognisance of the matter on the basis of a video that surfaced on the social media.

In a letter to Kangra SP Vimukt Ranjan, the commission asked him to submit a report immediately, she added. However, the SP was not available for comments despite repeated attempts.

In the video being widely shared on social media, Sharma alleged that the BJP legislator slapped her thrice on Thursday. Sharma, posted as the block development officer at Nagrota Suriyan in Kangra district rural development agency, claimed that Nehriya had physically and mentally tortured her several times.

Sharma, who has has now returned to her maternal house, had got married to Nehriya on April 26. She claimed that Nehriya had also beaten her in February this year.

The BJP MLA neither answered calls nor replied to messages sent to get a comment.

Sharma also alleged that her husband had expelled her from his house on fourth day of marriage when she tested positive for Covid. A police official said Nehria met Kangra SP and submitted his statement on Saturday.