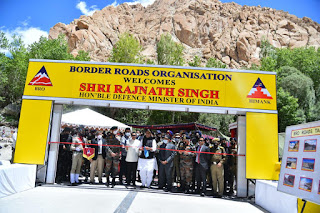 CM thanks Rajnath Singh for dedicating three bridges for HP

While addressing the people on the occasion, Rajnath Singh appreciated the role of the BRO in providing road connectivity to border areas of the country. He said that better connectivity was vital for security of the Nation.

Chief Minister Jai Ram Thakur, while thanking the Raksha Mantri for dedicating the bridges in the border States, said that three bridges dedicated in Himachal Pradesh were vital as they provide connectivity to far flung regions of the State where para military forces are deployed on Indo-China border areas. He said that 40 meter Pangi bridge on Powari-Pooh road constructed at a cost of Rs. 4.27 crore would provide round the year connectivity and would enhance logistic support to boost the morale of troops.

Jai Ram Thakur said that Kiran khud bridge constructed with a cost of Rs. 5.55 crore would play an important role in maintaining supply lines to troops besides ensuring uninterrupted line of communication. He said that the bridge would also enhance socio-economic development by giving impetus to agricultural activities in the area.

The Chief Minister said that 30 meter Titan bridge on Pooh-Kaurik road has been constructed at a cost of Rs. 2.16 crore which would ensure uninterrupted supply to the border area as this road was life line for troops deployed in Indo-China border.