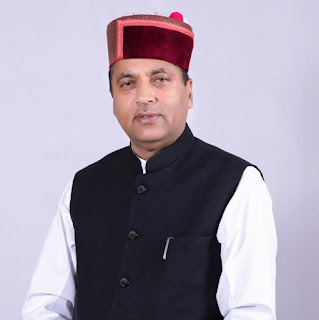 SHIMLA----Two days tour to Delhi has been successful as several issues related to development of Himachal Pradesh were discussed with Union Ministers of various Ministries. This was stated by Chief Minister Jai Ram Thakur while interacting with media at Annadale Shimla today on his arrival from New Delhi.

Jai Ram Thakur said that the Prime Minister Narendra Modi has announced free vaccine to all the States for inoculation of all 18 years and above people from 21st June. He said the decision to continue the system of 25 percent vaccines being procured directly by the private hospitals will go a long way in ensuring vaccine to more and more people through private hospitals at the decided prices. He also thanked the Prime Minister for extending Pradhan Mantri Garib Kalyan Anna Yojna till November this year which would go a long way in benefitting over 80 crore people of the country by providing free ration every month during the time of pandemic.

Chief Minister said that he also took up the matter with the Union Finance Minister Nirmala Sitharaman regarding GST compensation due from Government of India for the financial years 2017-18, 2018-19 and 2019-2020 to be provided to the State. He said that she has assured all possible help to the State in this regard.  He said that he also requested the Union Minister to provide the financial assistance to the State as recommended by the 15th Finance Commission. He also apprised the Union Minister that a tourism project worth Rs. 1892 crore posed to ADB for funding was waiting approval.

Jai Ram Thakur said that he had a detailed meeting with Union Home Minister Amit Shah and requested him to enhance the State's allocation of vaccine doses. He said that he also urged for early approval of Bulk Drug Park to be established in Una besides sanctioning Medical Devices Park, Electric Devices Manufacturing Hub in the State.

Chief Minister said that he also apprised the Union Raksha Mantri Rajnath Singh regarding his visit to Indo-Tibet border in Lahaul-Spiti district and urged him to provide additional funds to BRO for repair and maintenance of border roads. He also urged Union Minister to provide WALKER hospital Shimla to State Government if possible as this would provide additional medical facilities to the people of the State as this hospital was at a walking distance to IGMC.

Jai Ram Thakur said that he also had a meeting with Union Minister for Road, Transport and Highways Nitin Gadkari and urged him to speed up work on four laning of Shimla-Matour and Mandi-Pathankot National Highways. He said Union Minister has assured him that various projects under Central Road and Infrastructure Fund (CRIF) worth Rs.193 crore would be sanctioned to the state at the earliest.

Chief Minister said that he had detailed discussions with the Union Minister for Civil Aviation, Housing and Urban Affairs Hardeep Singh Puri regarding various issues pertaining to proposed airport in Mandi district and others Airports of the State. He said that a team has reached Mandi to conduct LIDAR survey of proposed Greenfield Airport Mandi

Jai Ram Thakur said that he also had a detailed meeting with the National BJP President regarding working of government and party organization in the State.