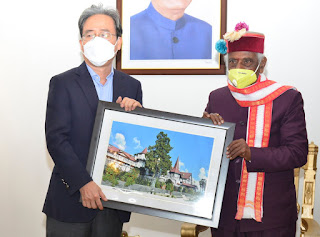 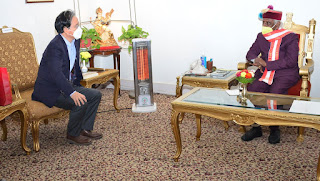 Ambassador of Republic of Korea calls on Governor

Dattatraya apprised the Ambassador of rich and diverse history of Himachal Pradesh and its rapid development in every sector, be it human resource development, tourism, agriculture or industrialization. He said that Himachal is a tourism state and every year millions of tourists visit the state. Korea and Himachal could collaborate in the tourism sector, he added. He said that the culture of both Korea and Himachal were quite advanced and both of them can work jointly in this direction. "We can make our relationship stronger through Cultural exchange programs", said the Governor.

He said that Himachal Pradesh and the Republic of Korea could collaborate in the field of tourism development, industrial investment, agriculture, environment, technology and skill development in particular as well as cultural exchange.

The Ambassador thanked the Governor for sparing time for the meeting. He said that both the Republic of Korea and India could work together in revamping regional connectivity and facilitating people to people contact.

The Ambassador was accompanied by Mr Chang Ho Seung, Minister-Counsellor and Ms Kang Yeon Soo, Second Secretary in the Embassy.