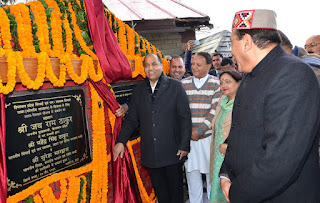 While addressing the people on the occasion, Chief Minister said that the 406 crore ambitious water supply scheme for Shimla city from Satluj river would be completed by the year 2022. He said that this would provide over 67 MLD water to Shimla town and ensure adequate water supply to town upto year 2050.

Chief Minister said that in order to facilitate the residents as well as tourists visiting Shimla, a covered footpath on valley side along with the stretch of road leading from IGMC Shimla to Sanjauli was being constructed under Shimla Smart City Mission which would be completed by spending an amount of Rs. 17.36 crore.  He said that the path would have smart poles with speaker, CCTV lighting facility and Wifi facility. He said that smart digital signage and monkey repellent devices would also be installed along side the path.

Education Minister Suresh Bhardwaj thanked the Chief Minister for dedicating and laying foundation stones of developmental projects worth crores of rupees for Shimla town on day one of the New Year 2020.