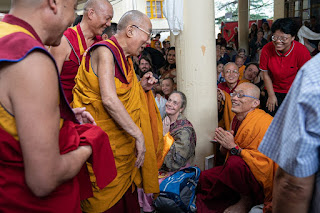 Dharamshala---Tibetan Spiritual Leader  Dalai Lama met a group of faculty members of the Dharamshala Government College  who have come to seek Dalai lama s blessing and guidance on their newly introduced six-month certificate course on the 'revival of ancient Indian knowledge and tradition'.

Dalai Lama met the group at his residence and shared some profounding message on secular ethics. Dalai Lama mentioned that most of the problems facing the world today are essentially created by human beings. He denoted that more often than not humans are prone to use their gifted intelligence in the wrong manner paving way for the disposal of destructive emotions when in actuality humans are exceptionally capable to think globally for the long run.

"This capacity and potential of humans to think globally for the long run are often limited by the overwhelming destructive emotions", said Dalai lama.

The basic human nature as Dalai lama  noted is compassion since human beings are social animals and so the very instinct is to co-exists and survive peacefully and amicably. However, Dalai lama considers that modern education to some extent is now replacing and altering the essence of basic human nature.

Dalai lama asserted that India with its rich ancient traditions has the great potential to imbibe education on tackling the emotions particularly the afflictive emotions through the practice of Samatha and Vipassana.

"Only this country can combine modern education with the ancient Indian knowledge to tackle destructive emotions" asserted  Dalai Lama.

Dalai lama further mentioned that modern India should begin the process of reviving its ancient knowledge and traditions for the coming generation to reap the benefits of the result. His Holiness remained strongly optimistic that the end of the 21st century could be more peaceful.

Dalai lama expressed his tremendous appreciation to the Dharamshala Government College and its faculty on the initiative to revive the ancient Indian knowledge.