Himachal signs 92 MoUs with investment of Rs. 2112 crores during mini conclave at Manali 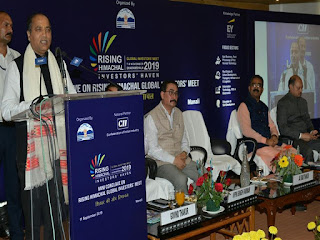 MANALI---------------As many as 92 MoUs were signed by the state government to attract investment worth Rs. 2112 crore during the mini conclave of proposed global investor's meet held today at Manali in Kullu district. Out of these, 63 MoUs are for tourism sector only with investment of Rs. 1500 crores.

This was State by the Chief Minister Jai Ram Thakur while presiding over the mini conclave which was participated by the entrepreneurs from Himachal Pradesh and other states.

The Chief Minister said that the State government has conducted three international road shows in Germany, Netherlands and UAE and six domestic road shows in Delhi, Bangalore, Hyderabad, Mumbai, Ahmedabad and Chandigarh where positive response was received from business community to invest in Himachal Pradesh.

Jai Ram Thakur said that the State government has adopted a holistic approach to attract investment and Himachal Pradesh was now ranked top amongst fast mover's category in ease of doing reforms. The Single Window Monitoring and Clearance Authority of the state reflect strong commitment of the government to ensuring efficiency, transparency, timeliness and accountability in providing services to investors.

He said that pristine atmosphere, cleanest air in the country, peaceful environment, cultural diversity and linguistic plurality to offer the State offers the visitors a variety of choices – adventure, wildlife, eco-tourism, heritage, spiritual, monuments, religious, skiing etc. "My government is committed to make sustainable tourism as one of the prime engines of growth in the state by establishing it as a leading global sustainable tourism destination", he said.

Jai Ram Thakur said that soon after assuming the office, he decided to take innovative steps aimed at welfare of the people and development of the State and organising the Global Investor's Meet was one of these. The State offers various incentives to the entrepreneurs such as pollution-free environment, investor friendly policies, responsive and accountable administration which make Himachal Pradesh a most favoured destination for the investors, he added.

The Chief Minister said that till date as many as total 419 MoUs has been signed in different sectors with an investment of Rs 41000 crore. He said that the strong and able leadership of Prime Minister Narendra Modi has ensured that the nation and the state forge ahead on the path of progress and prosperity.

He said that the mini conclave of Global Investor's Meet being organized at Manali aims at listening to the problems of entrepreneurs and businessman of our State and ensuring their redressal so that they could leverage the maximum benefits of Global Investors Meet. He said that investors coming from other states would not be able to invest without the active support of the local entrepreneurs as they would require their support to do business. He urged the local entrepreneurs to be part of the Global Investors Meet and making their contribution in the development of the State. He said that the State Government would consider to simplifying the procedure to attract investment in MSME sector.

Health and Family Welfare Minister Vipin Singh Parmar said that it was on personal interest of the Chief Minister Jai Ram Thakur that the Global Investor's Meet was being held in the State. He said that the State witnessed rapid industrialisation during the special industrial package announced by former Prime Minister Atal Bihari Vajpayee, but after completion of the package, it requires special thrust to attract investment in the State. He said that the State has made commendable progress in the health sector and this sector also has a great scope for private investment. There was great scope for setting up a super speciality hospital in the State, he added.

Industries Minister Bikram Singh Thakur said that the State government was committed to provide all facilities to the entrepreneurs to facilitate them to invest in the state. He said that the government was laying special stress on ease of doing business and the state also has peaceful environment and congenial industrial relations. He said that the Industries Department has adopted proactive approach to getting all clearances to the industrialists to set up their units in the State. He also invited the entrepreneurs to be the part of Global Investor Meet.

Forest Minister Govind Thakur said that the state was fast forging ahead on the path of progress and prosperity under the dynamic leadership of Chief Minister Jai Ram Thakur. He said that it was for the first time that the idea of Global Investor's Meet was conceived being under visionary leadership of Jai Ram Thakur to attract investment of over Rs. 85,000 crore.

Chief Secretary Dr. Shrikant Baldi presented vote of thanks. He said that the focus of the Conclave has been tourist, health and wellness.  He said that the state had needing capacity of about on lakh which needed to be increased to facilitate tourists visiting the state.

Director, Industries Hansraj Sharma gave information to the   investors on new industrial policy of the state. He also spoke about various initiatives taken by the state in easing the process for investment and highlighted the multiple reasons for investment in industrial sector.