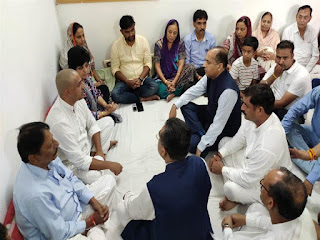 He also placed floral tributes on the portrait of Jai Kishan Sharma.

The Chief Minister prayed to the Almighty to give peace to the departed soul and strength to the bereaved family members to bear this irreparable loss.

Jai Kishan Sharma remained legislator of H.P. Vidhan Sabha from Santokhgarh Assembly segment (now Haroli) from 1998 to 2003 and State BJP President from 2000 to 2003.

While interacting with media, the Chief Minister said that Jai Kishan Sharma was a gentleman, politician and mass leader. He said that contributions made by Jai Kishan Sharma for development of Una district especially Haroli area would be remembered for a long time by the people the area.