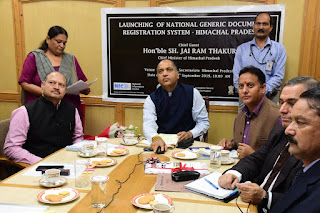 Speaking on the occasion, Chief Minister said that this would facilitate speedy registration in the State besides facilitating online valuation and payment. He said that after successful implementation of this pilot project it would be rolled out throughout the State.

Chief Minister said that the system would also go a long way in effective dealing with land related issues and lessen the un-necessary litigation in revenue related matters. He said that the NGDRS would also help in avoiding duplicate usages of stamp paper. He said that the copy of registered document would be stored using scanning technology and the downloaded document could be viewed by generating certified copy by authorized users.

Jai Ram Thakur said that the land owners and buyers could make payment of stamp duty and registration fee through online mode. He said that Himachal Pradesh has become 7th State of Country to have implemented this project. He said that this was a step forward in visualizing the dream of our Prime Minister Narendra Modi of 'One Nation One Software'.

On this occasion, Chief Minister also handed over the first computerized land registry to the land owners Rakesh Kumar and Meena.

Secretary, Electronics and Information Technology, Government of India Ajay Prakash Sawhney while addressing the meeting through video conferencing from New Delhi said that the NGDRS was an uniform software being used throughout the country for benefit of the users. He said that facility of Digilock has also been provided so that consumers could digilock their important documents.