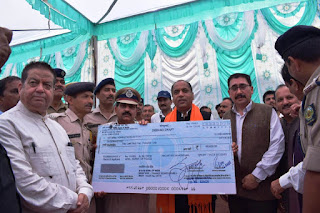 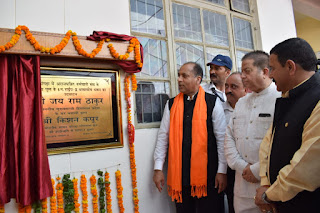 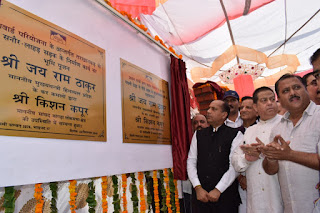 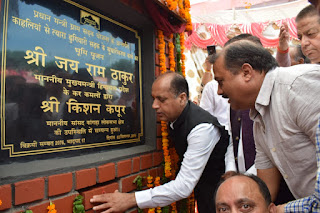 SHIMLA-----The state government is committed to further develop Bir-Billing as adventure sports and Pong Dam as water sports destinations so at to make these places as world tourist destinations. This was stated by the Chief Minister Jai Ram Thakur while presiding over the Panchayat Representative Sammelan and Centenary Year's Celebrations of The Kangra Central Cooperative Bank (KCCB) at Dharamshala on Monday.

He thanked the people of the State in general and people of Kangra district in particular for giving massive mandate to the BJP candidates in the recently held Lok Sabha elections. He said that all the four candidates won by record margins and the vote share of the BJP was also highest in the country. He said that Kangra Parliamentary Constituency made a new record by winning the Kangra seat by 72 percent vote share. He said that the BJP also won the Shimla Parliamentary seat by a margin of over 3.70 lakh.

The Chief Minister said that soon after holding the reins of the State, the present government laid special stress on development of the rural areas as about ninety percent population of the state resides in these areas. He said that making Himachal Pradesh as an ODF state after Kerala was a major achievement. He said that the State was also getting full support from the central government in expediting the pace of development. He said that due to the dynamic leadership of Prime Minister Narendra Modi, India was poised to emerge as the Super Power of the world. Now, Article 370 and 35A have become history and now India has one Constitution and one Symbol, he said adding that this was possible due to the strong leadership at the Centre in form of Shri Modi.

Jai Ram Thakur said that Jan Dhan Yojna, Ayushmann Bharat, Kissan Samman Nidhi Yojna, Ujjawala Yojna etc. were  few central schemes launched by Shri Modi which were proving a stepping stone for making of a New India. He said that the state government also launched Him Care scheme to cover the 22 lakh people not covered under Ayushmann Bharat, Grihini Suvidha Yojna to cover all the families not covered under Ujjawala Yojna besides Sahara Yojna for providing relief to the families having a member suffering from serious illness by providing Rs. 2000 per month.

He launched new products/schemes of Kangra Central Cooperative Bank, including Centenary Scheme "Swadhan-Ek Shtabadi Uphaar" for the employees, farmers, women and those engaged in dairy development. He also inaugurated photo gallery, 100th ATM and logo of the bank.

He launched Swachh Sarvekshan Gramin-2019 Abhiyaan and provided "Badhai Patra" to the beneficiaries of Mukhya Mantri Aawas Yojna and inaugurated  Jal Shakti Abhiyaan on this occasion.

The Chief Minister inaugurated Art Gallery, Kotwali Bazar constructed at a cost of Rs. 1.60 crore and laid foundation stone of Animal Husbandry office building to be completed by spending an amount of Rs. 3.22 crore.

Later, the Chief Minister laid foundation stone of Span RCC T-Beam bridge over Bhagan Khud-II to be constructed at a cost of about Rs. 4 crore and inaugurated link road from Kaned to Thamba including bridge over Ghiari Khud completed at a cost of Rs. 1.78 crore.

Speaking on the occasion, Rural Development and Panchayati Raj Minister Virender Kanwar said that after achieving the target of making the state ODF, now efforts were on to make all the 3226 Panchayats of the State waste free through effective waste management. He thanked the Chief Minister for launching Swachh Sarvekshan Gramin-2019 Abhiyan. He said that for prosperity of the nation, it was vital that the rural areas get special deal in matter of development. He said that efforts of the government were to ensure socio-economic upliftment of the farmers so as to transform the economy of the State.

Chairman, KCCB Dr Rajiv Bhardwaj said that the bank has entered 100th year of its existence and service to the people of the State. He thanked the Chief Minister for launching various schemes of the bank.

The Chief Minister said that the State was fortunate to have guidance and benevolence of Prime Minister Narendra Modi. He said that the Centre Government has sanctioned developmental projects worth crores of rupees for the state which would go a long way in accelerating the pace of development.

Jai Ram Thakur said that Kangra district was contributing for development of the state. He said that the people of the Kangra Constituency Shri Kishan Kapoor as their MP with a record margin of over 4.72 lakh votes. He said that now they need to replicate the same by electing their MLA from Dharamshala.

State level Teachers Day to be celebrated at Peterhoff

A Spokesperson of the Education department has informed that the Governor will honour the teachers on this occasion.

Education Minister Suresh Bhardwaj will be also present on this occasion.