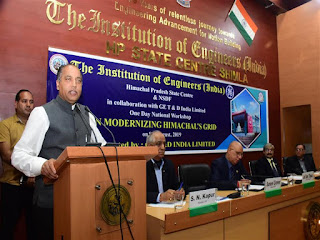 SHIMLA-----In order to provide high quality twenty four hour power supply to the people of the State, it was important to ensure use of latest technologies and modernise the grid to make it more reliable and efficient. This was stated by the Chief Minister Jai Ram Thakur while addressing the workshop of Institution of Engineers (India) Himachal Pradesh State Centre and NSDF in collaboration with GE T&D India Ltd. on 'Modernising Himachal Grid' here today.

Jai Ram Thakur said that the GE T&D India Limited along with HPPTCL and HPSEBL was executing projects worth Rs. 515 crore to modernise the State's Grid Infrastructures. Some of the key projects include Gas Insulated Substation at Wangtoo, Gumma, Urni, Dehan, Barsaine and Hatkoti, he added. He said that once the projects were completed these projects would serve the State's growing demand and feed into the national grid through interstate power transmission projects.

He said that Prime Minister Narendra Modi has a vision of One Nation-One Grid and was working in this direction. He said that latest Smart Grid Technology would enormously help in more efficient transmission of power, quicker restoration of electricity and in reducing operations and management costs. He said that this would ultimately help in lowering the power cost for the consumers.

Jai Ram Thakur congratulated the Institutions of Engineers Himachal Pradesh and National Skill Development Forum for organising this workshop which would go a long way in providing the opportunities to the engineers to learn about latest technologies to drive maximum benefits for the State.

Managing Director GE T &D India Limited Sunil Wadhwa said that sharing of knowledge was vital for development of any society and nation. He said that one must try new things and go for new initiatives as this not only brings a sea change in the society, but could also transform our society. He said that the digital world today was the buzz word, therefore maximum thrust must be laid on digitisation.

Chairman National Skill Development Forum Er. Sunil Grover said that the main objective of the Institution of Engineers (India) Himachal Centre was to bring together the technocrats on a common platform to upgrade their skills by sharing their knowledge. He said that the efforts were being made by the Centre for Skill upgradation of the youth of the State, besides re-Skilling  of the our Engineers.

Managing Director HPSEBL J.P. Kalta and S.N. Kapoor were present on the occasion among others.